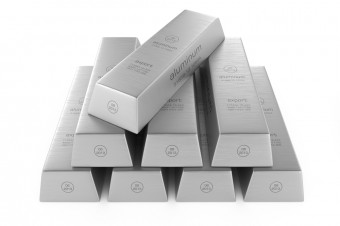 Aluminium is literally one of the most common elements on Earth.  So how did it come to be that aluminium cost more than gold? Was it similar to how the relatively common and easily acquired mined diamond came to be seen as valuable in the last century due to strict control of supply to consumers and some of the best marketing the world has ever seen? (For reference, the cost of mining a 1 carat diamond is about $50, though it sells for drastically more than that, even low quality ones for industrial use.  On the high end, suitably high quality ones will sell for, on average around $25,000 once cut and polished, generally by cheap labor in places like China.)

The simple answer is that although aluminium makes up about 8% of the Earth’s crust, it has never been known to occur in its metallic form anywhere on Earth. Instead, aluminium appears mainly as a chemical compound across the globe, for example inside potassium aluminium sulfate.

Before aluminium was discovered, or even theorised, so called “alum compounds”, like potassium aluminium sulfate, have been used extensively since antiquity for everything from leather tanning to fire-proofing. In fact, potassium aluminium sulfate (colloquially known as potassium alum) is still used today in things like aftershave and baking powder and most awesomely of all, in its crystal state it can be used as a “deodorant rock” that you rub on yourself to eliminate body odour.

Now, at first glance it would seem like these chemical compounds are referred to as “alum” because they contain aluminium, but this isn’t the case. The word “Alum” is the colloquial name given to a wide range of compounds that don’t necessarily include aluminum, for example chromium potassium sulfate which is commonly shortened to chrome alum. The word aluminum itself is a derivative of the the word “alum”, not the other way around.

It is commonly held that aluminum wasn’t theorised to exist until around 1807 when a chemist, Sir Humphrey Davy, argued that alum was the salt of a yet undiscovered metal, a metal Davy wanted to call “alumium”. However, there’s some debate amongst the scientific community about whether Davy was truly the first person to make this leap, because 30 years prior in 1778, the French chemist, Antoine Lavoisier, posited in his landmark book “Elements of Chemistry” that what he called “argilla” (aluminium oxide) could exist as a solid metal in theory, but that the technology of the day couldn’t separate the strongly bound oxygen atoms. In fact, argilla is tentatively listed as an actual element in Lavoiser’s original draft of his table of elements.

Aluminium as we know it today was first created in a lab by Hans Christian Oersted by heating aluminium chloride with potassium amalgam in 1825. In honor of Davy’s work which had inspired Oersted’s experiment in the first place, this new metal was dubbed “aluminium”.

The flecks of metal that Oersted produced using this method were so small and impure that a proper analysis of the metal was impossible.

Two years later, Friedrich Wöhler entered the aluminum manufacturing scene and developed a new way of isolating aluminium in its powdered form by improving upon Oersted’s original experiment. Even then it took another 18 years for enough of the metal to be produced for scientists to properly study its properties, and it wasn’t until 1845 that aluminium’s remarkable lightness was noted.

Nine years later, in 1854, Henri Sainte-Claire Deville developed a way of producing the metal on a much larger scale with the use of sodium, allowing, for the first time in history, kilograms of the metal to be produced at a time. For comparisons sake, it had taken Wöhler years to produce the same amount of aluminium Deville could produce in a single day.

A year later, in 1855, 12 small ingots of aluminium were displayed at the “Exposition Universelle” a huge French exhibition organised at the bequest of French emperor Napoleon III. Almost immediately after the exhibition, demand for this magical metal sky-rocketed. Its shininess combined with its almost ghostly lightness compared to other metals made it an ideal metal for jewellery and it wasn’t long until the French elite were wearing broaches and buttons made of the aluminium.

This passing fancy that the upper echelons of society had with aluminum infuriated Deville to no end because he felt that the metal had significant practical applications to benefit the masses, not just to be used as a curiosity to be flaunted by the elite.

One person who shared Deville’s vision was Emperor Napoleon III himself who granted Deville a virtually unlimited budget to study and produce the metal long before the exhibition. Napoleon had hoped that this new metal could be used to produce lightweight weapons and armor for his army. Although a few helmets were produced, the sheer cost of refining the metal shelved the plan indefinitely.

Frustrated, Napoleon III had his supply of aluminium melted down and pressed into cutlery. As the oft-repeated story goes, Napoleon III was rumoured to have eaten off of the aluminium plates while his guests had to make do with ones made of gold. Whether that story is true or not, at this point aluminium really was harder to get hold of than gold and the price reflected that, despite its prevalence in the Earth compared to gold.

All of that changed in 1886 when it was discovered (twice) that you could easily obtain oodles of aluminum using electrolysis. The discovery was made by Paul Lois Toussaint Héroult and Charles Martin Hall at almost the same time in both France and America, totally independent from one another. For this reason, the process (which is still used today) is referred to as the Héroult/Hall process in honor of both of them.

Two years after this, it was discovered by Karl Bayer that aluminium oxide could be made very cheaply from bauxite. As a result of both of these things, the price of aluminium plummeted by 80% overnight. In a few short years, aluminium went from being literally the most expensive metal on Earth to the cheapest. For reference, in 1852 (before the Héroult/Hall process), aluminium sold for upwards of $1,200 per kilo. By the start of the 20th century, that same amount of aluminium cost under a dollar.