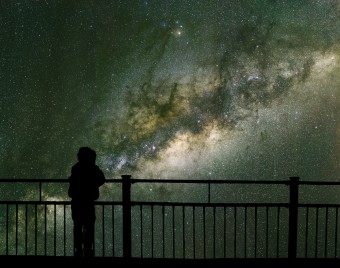 Today I found out why our galaxy is called the Milky Way and what it’s called in other languages.

No, it has nothing to do with the candy bar. Like many words we use today, the English name of our galaxy is derived from its Latin name: Via Lactea. Translated, that means “the road of milk.” The Romans actually got the name from the Greeks, who called our galaxy “galaxias kyklos” or “milky circle.” Incidentally, the Greek name is also where we get the term “galaxy.”

No one knows exactly who came up with the name, but it isn’t difficult to see how the name came about. From Earth, at least if you’re well outside the boundaries of city lights, our galaxy looks something like a band of milky light over a black background, as we are viewing it on its side and the billions of distant stars in our galaxy create a nice visible band of light.

As for why the ancient Greeks called it the “milky circle,” the myth goes that Zeus brought Heracles to Hera to suckle when she was sleeping. Hera was in conflict with the little infant, as you would be if your husband brought home a half-mortal child that wasn’t yours. As baby Heracles was having his meal, Hera woke up suddenly and pushed him away, resulting in a few drops of spilt milk. The drops created the galaxy that is now known as the Milky Way.

Various other languages have translations of “Milky Way” as the name of the galaxy, such as the German “Milchstrasse” and the Norwegian “Melkeveien.” There are, however, many other mythological origin stories that explain the various alternate names of the Milky Way in other languages.

In Finland, the Milky Way is called “Linnunrata,” or “path of the birds.” In Finnish Mythology, the world was formed from a waterfowl’s egg bursting. The sky was the shell of the egg, and the Earth as we know it was flat. At the edges of the Earth was “Lintukoto,” or the home of the birds. Lintukoto was a warm region where birds migrated during the winter. The band of light that the Greeks thought of as milk was, according to the Finns, the path that the birds took on their way to Lintukoto. Thus, it’s Linnunrata, “path of the birds.”

Armenia has a different idea about the Milky Way. There, it’s called hard goghi chanaparh, or “Straw Thief’s Way.” The story goes that the god Vahagn stole cartloads of straw Barsham, the Assyrian King, and took it to Armenia during a particularly cold winter. To get there, he fled across the Heavens and dropped some straw on the way, making the Milky Way.

Likewise, the Milky Way is called various forms of “straw way” in several other languages across Central Asia and Africa. It’s Ça Taxina Taça in Chechen, or “the route of scattered straw;” traditionally “kumova slama” or “Godfather’s Straw” in Croatian, though Milky Way is also used now in Croatia; and samanyolu or “road of straw” in Turkish. It’s likely that Arabs heard the story in Armenia first and spread the name to various other lands.

In many northern countries, the Milky Way is called the “Winter Way,” such as the Icelandic “vetrarbrautin,” the alternative Norwegian “vinterbrauta,” and the Swedish “vintergatan.” The reason for this is thought to be because, in the Northern Hemisphere, the Milky Way is more visible during the winter.

In much of East Asia, the galaxy is referred to as the “Silver River.” A Chinese legend says that once upon a time, there was a beautiful young maiden named the Goddess Weaver, the daughter of the Celestial Queen Mother. One day, a Buffalo Boy was tending his herd when he spied the Goddess Weaver bathing in a nearby lake. The two instantly fell in love, and were soon married and produced two children. But the Celestial Queen Mother grew jealous of their love and stole the Goddess Weaver away. When the Buffalo Boy pursued them, the Queen took out a pin and drew a silver river between them so that they would be separated forever. That silver river was the Milky Way. In Japan and Korea “silver river” means galaxies in general, not just the Milky Way.

In Spanish, the Milky Way is called a few different things. First, via lactea, or the Milky Way. Camino de Santiago means the “Road of Santiago” or “Road to Santiago,” and was used for the Milky Way because pilgrims used it to guide them to Santiago de Compostela, a holy site. Compostela is the third way to say the name of the galaxy, and this one is perhaps the most accurate of all the different names. It literally means “the field of stars.”