This Day in History: May 22nd 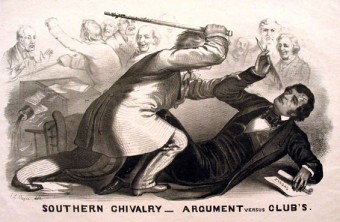 On May 22, 1856, an angry young Congressman from South Carolina entered the Senate chamber searching for a certain older Senator from Massachusetts. When the younger man honed in on the man in question, he beat him brutally with a gold tipped cane until it broke into pieces. Then he calmly walked away, not knowing if his victim was dead or alive.

Senator Charles Sumner was an ardent abolitionist, and he had a bone to pick with his fellow senators who were in favor of allowing slavery to spread into America’s new territories in the west. During a speech he gave on May 19, 1856, one of the senators Sumner called out was Andrew Pickens Butler of South Carolina. Sumner accused him of taking “that harlot, slavery,” as his mistress, and accused the South of immorality for allowing slavery in the first place.

Pickens was not present at the time as he was recuperating from an illness, but his nephew, Preston Brooks, a member of the House of Representatives from South Carolina, caught wind of Sumner’s speech and decided Southern and family honor was at stake. The Yankee must pay.

Three days later, on May 22, Preston Brooks found Charles Sumner working at his desk and began beating the defenseless older man savagely with a cane given to him as gift for winning a duel several years earlier. Even when Sumner fell to the floor, Brooks continued to strike him on the head and body. Brooks stopped only after his cane shattered into pieces and was rendered useless. He turned around and left the Senate chamber with Sumner bloody, broken and unconscious on the floor.

Senator Sumner almost died from his injuries, but managed to pull through, though it took him three years to recover and he would suffer from severe headaches and PTSD for the remainder of his life.

Not surprisingly, northerners were outraged by this attack on Charles Sumner, whereas in the south Brooks was celebrated as a hero. Southerners from all over the region sent him replacement canes, and although Brooks had resigned, he was re-elected by his constituents to the House by a landslide, two actions that upset Americans in the north almost as much as the original assault. Brooks returned to Congress, but died suddenly less than a year after he attacked Senator Sumner.

After his return to the Senate in 1860, Sumner gave another passionate anti-slavery speech entitled “The Barbarism of Slavery.” Once more he was vilified and even threatened, but at least no-one resorted to physical violence this time. Unfortunately, there was plenty of that to come in the very near future, as the country was poised on the edge of the Civil War, the bloodiest conflict in United States history.