This Day in History: May 23rd 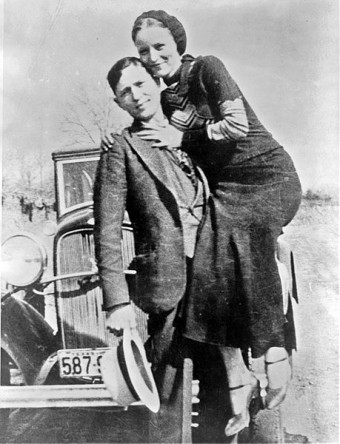 On May 23, 1934, the crime spree of Bonnie and Clyde, who spent over a year playing a game of cat-and-mouse with law enforcement, ended in a barrage of bullets during a police ambush. In spite of the horrific nature of their crimes, including murder, Bonnie and Clyde have become romanticized folk heroes to many.

Bonnie and Clyde were both born in Texas to poor families barely making a living as farmers. When they met in 1930, 21-year-old Clyde Barrow had already been arrested multiple times for theft. Bonnie Parker, who at age 19 had already been married for four years, immediately fell for Clyde and left her husband. She remained devoted to Barrow for the rest of her short life.

When Clyde was released from a stint in prison in February 1932, it was clear the experience had done nothing to rehabilitate him as he emerged angrier and more dangerous then before. While Bonnie was serving a short jail sentence two months later, Clyde and Raymond Hamilton, a member of the fledgling Barrow gang, planned what they figured would be a no-fuss robbery of a general store. During the actual commission of the crime however, things went awry and the store’s owner was killed.

This was a turning point for Bonnie. She knew if she stayed with Clyde it meant a life (probably a very short one) on the run from the law. Or she could start anew; she was young enough to turn herself around…

She chose to stay with Clyde, and this marked the beginning of their notorious crime spree that spanned five states. They frequently stole new cars and license plates to escape detection, and Clyde made it his business to know every back road in Texas, Oklahoma, Missouri, Louisiana, and New Mexico. 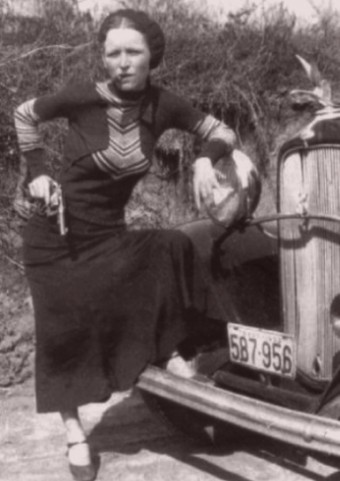 By the time the couple hooked up with Clyde’s brother Buck and his wife Blanche in 1933, the cops were looking for them in relation to several murders, bank robberies, gas station and grocery store hold-ups and numerous cars thefts. On April 13, 1933, two weeks after their reunion, police arrived at the apartment where the two couples were living in Joplin, Missouri. A shoot-out ensued where one policeman was killed and another was mortally wounded. The Barrow gang made their get-away amidst the chaos.

Their life on the run continued. When their car went down an embankment and caught fire, Bonnie was trapped inside. If not for the aid of two local farmers (who obviously hadn’t a clue who they were helping) she would have lost her life. Any of the Barrow gang seeking medical attention was clearly out of the question.

When the police raided their apartment in Joplin they found undeveloped film, so pictures of Bonnie and Clyde had been published widely. In July 1933 Bonnie and Clyde, along with Buck, Blanche, and gang member W.D. Jones, were staying in two cabins near Platte City, Missouri. The police had been tipped off by the locals that the infamous Barrow gang was in residence, and they came better prepared than the cops in Joplin had.

Another gunfight erupted, but this time the police pumped massive fire power at their targets. Incredibly, Bonnie, Clyde and the rest made it to their vehicle and made a break for it, but the cops kept shooting and the shattered glass seriously injured one of Blanche’s eyes.

Clyde drove for 24 hours straight, finally stopping in Dexter, Iowa, but a farmer had recognized them and alerted the authorities. Over a hundred local police, members of the National Guard, farmers and vigilantes were on hand to welcome the Barrow gang to Iowa. Completely outnumbered, they tried to shoot their way out anyway.

Buck was shot in the head and died a few days later. Blanche was captured at his side. Bonnie, Clyde, and W.D. Jones evaded capture by swimming across a river. Clyde stole another car as soon as he was able so he and Bonnie could continue to dodge the police. W.D Jones was never heard from again.

By November 1933, Bonnie and Clyde went back to stealing to survive, but they knew they had to be very cautious. They lived in their car because renting an apartment or hotel room was just too dangerous. The walls were closing in on them. Everyone was looking for Bonnie and Clyde.

Lawmen had discovered that Bonnie and Clyde, the heartless outlaws, remained very close to their families, especially Bonnie who was close to her mother. They made regular trips back to Texas to visit their kin, and when the police got word they were heading that way to visit friend Henry Methvin’s family, the police wasted no time in setting up an ambush.

On the morning of May 23, 1934, Clyde Barrow slowed down a bit when he saw what he thought was Henry Methvin’s vehicle by the side of the road, giving the policemen just enough time to open fire. Six officers fired 130 bullets into the couple, who had no time to react and are believed to have died quickly. Considering their vehicle looked like a hunk of swiss cheese, we will go with this assumption.

The bodies of Clyde Barrow and Bonnie Parker were brought back to Dallas where they were put on public display. Large crowds gathered to gawk at the bloodied corpses of the couple (reality TV and the Internet having not been invented yet, people apparently had to get their fix somehow…).

Bonnie knew she and Clyde weren’t long for this world, and she had made it clear she wanted to be buried next to Clyde. Their families ignored her plea, and they were not only in separate graves, but in different cemeteries.

Since girlhood, Bonnie had loved writing poetry, and this short poem indicates that no-one knew better than Bonnie herself exactly where their life of crime would lead them:

They don’t think they’re too smart or desperate, They know the law always wins; They’ve been shot at before, But they do not ignore That death is the wages of sin.

Some day they’ll go down together; And they’ll bury them side by side, To a few it’ll be grief— To the law a relief— But it’s death for Bonnie and Clyde.