This Day in History: May 21st 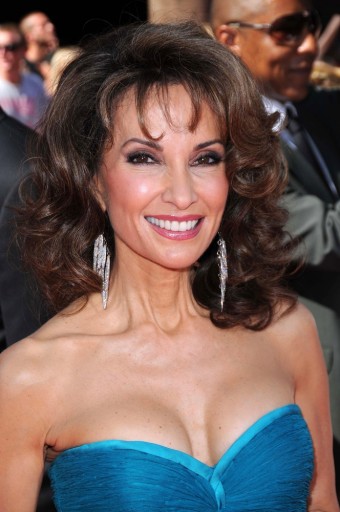 On May 21, 1999, Susan Lucci, who’d been portraying “All My Children’s” legendary femme fatale Erica Kane for just shy of three decades, finally won an Emmy Award after being nominated an astounding 19 times. Having been nominated so many times to no avail, Lucci hadn’t even bothered to prepare an acceptance speech. Isn’t that always the way?

Susan Lucci was born on December 23, 1946 in Scarsdale, New York. She always aspired to be a performer, and participated in both voice and dance classes throughout her teen years. Susan was active in school and community theater before being accepted to Marymount College in Tarrytown, New York, a college renowned for its performing arts program.

After graduation, Lucci headed for New York City where she found work as an extra, a stand-in and day-player parts on several soap operas. In 1969, she auditioned for a new soap opera called “All My Children” and won the role of Erica Kane, a character TV Guide hailed as: “Unequivocally the most famous soap opera character in the history of daytime TV.”

Most of the credit must go to Lucci’s brilliant portrayal of the sultry, tempestuous, conniving, amoral, maddening yet somehow likeable Erica Kane. You wanted to reach through the screen and shake her, but you couldn’t wait to see what mischief she’d get in to next.

Fans of the show adored her, and Lucci was nominated for her first Emmy in 1978. She lost. She was nominated every year from 1981-93 – losing every single time. Though there were rumors she was a bit miffed at being snubbed in the early ‘80s, after that the laidback Lucci chose to see the humorous side of it. During a 1990 appearance on “Saturday Night Live”, the cast and crew kept sauntering past her carrying Emmy statuettes during her opening monologue.

So when Shemar Moore from “The Young and the Restless” who was presenting the Daytime Emmy Award for Best Actress in 1999, excitedly announced: “The streak is over…Susan Lucci!”

The ecstatic crowd rose to their feet in a standing ovation that lasted for a full four minutes. Many of those in attendance were teary-eyed, especially her co-stars. An emotional Susan Lucci thanked her husband and the “All My Children” cast, crew and fans. Before she left the stage, she remarked, “I’m going to go back to that studio Monday and I’m going to play Erica Kane for all she’s worth.”

Susan Lucci gave life to the formidable Erica Kane for four decades, until “All My Children” was cancelled in 2011. She published her memoirs, All My Life, which gave the reader a peek into the world of soap opera super-stardom.

So in the end, what was Susan Lucci’s take on finally winning that Emmy? In the words of the diva herself: “It’s really an honor to be nominated. But it is much better to win.”