This Day in History: April 17th 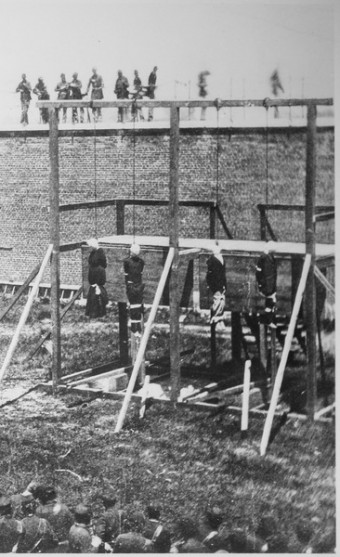 Execution of the conspirators in Lincoln’s assassination, including Mary Surratt

Mary Surratt, who was convicted of treason, conspiracy and plotting the murder of President Abraham Lincoln, was the first woman in United States history to be sentenced to death and executed. But to this day, there are questions about how much Mary knew about the plan to kill Lincoln. There is even the possibility that Mary may have been completely innocent. The opinions of historians are still divided.

Until the Civil War, Mary lived with her husband John and their three children, John Jr., Anna, and Issac in Baltimore, MD. By 1861, Isaac had enlisted in the Confederate Army and John was acting as a Confederate spy. When her husband died in 1964, Mary and Anna moved from Baltimore to the District of Columbia, where they lived and rented out rooms in a boardinghouse left to them by John Surratt. Mary also inherited a tavern called Surrattsville that she leased to a man named John Minchin Lloyd. This helped her to keep the family afloat financially.

While spying for the Confederacy, John Surratt Jr. made the acquaintance of John Wilkes Booth. Booth and several other co-conspirators were regular fixtures at the boardinghouse, though it’s impossible to say whether Mary was aware of what transpired at their meetings.

Meanwhile at the Surrattville tavern, several of the conspirators hid two Spencer carbines in an unfinished loft. On April 11, Mary Surratt accompanied by one of her boarders, Louis J. Weichmann, took a ride over to Surrattville and met John Lloyd, who was leasing the tavern, along the way. Lloyd recalled that Mrs. Surratt told him that the “shooting irons” would be required shortly. (She was supposedly referring to the rifles tucked away in the tavern’s loft.)

On April 14, the day President Lincoln was assassinated, Mary once again made her way to Surrattville in the company of Mr. Weichmann. According to Lloyd, this time she was delivering Booth’s field glasses and issued the tavern keeper some last minute instructions. Lloyd testified that Mary:

…told me to have those shooting-irons ready that night, there would be some parties who would call for them.

Just hours after Lincoln’s murder, detectives swarmed the Surratt boarding house and questioned everyone present. On April 17, 1865, federal soldiers returned and found a picture of John Wilkes Booth and several Confederate leaders, a pistol, percussion caps and a mold for bullet making. To make matters worse for Surratt, as she was being arrested Lewis Powell showed up – who was wanted for attempting to assassinate Secretary of State William Seward.

Mary Surratt claimed that she was completely innocent of any crime. She claimed that she knew nothing of John Wilkes Booth’s plot, and was visiting Surrattsville to collect debts on totally unrelated matters. Nevertheless, she was convicted mainly on the testimony of Weichmann and Lloyd, and was sentenced to death, but the jury recommended mercy (a life sentence as opposed to execution,) considering her age and sex.

President Johnson insisted he never saw the plea for mercy, but Judge Advocate Joseph Holt told a different story. Holt said he was in President Jackson’s presence when he read it, and remembered Johnson’s comment that Mary Surratt “kept the nest that hatched the egg.”

Wearing a black dress and veil, Mary Surratt was executed by hanging on July 7, 1865. Her last words were supposedly “Don’t let me fall.” Her daughter Anna made a successful plea for her mother’s remains fours years after her death, and today Mary Surratt rests in Mount Olivet Cemetery in Washington, D.C.