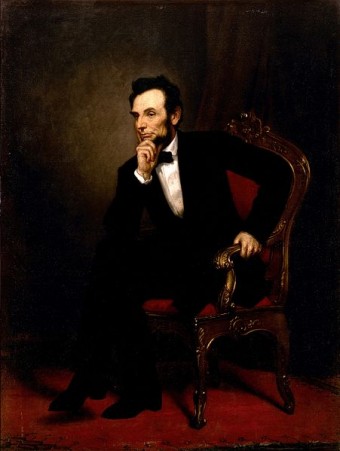 In 1860, the clean shaven Abraham Lincoln was running for President of the United States. This clean shaven look was somewhat odd for a man of the age. You see, shortly before Lincoln decided to grow a beard, something of a beard revolution swept the United States and by the mid-19th century the formerly predominately clean-shaven men of America now nearly universally were sporting beards. In fact, one reporter, doing a story on the new trend in 1857, walked the streets of Boston and after counting 543 men that walked by him, found that 62% of them were now sporting bushy beards and all but 4 of the rest had some other type of significant facial hair. Even those four that lacked any significant facial hair sported what would later be called Side Burns, after General Ambrose Burnside.

The clean shaven look that Lincoln at the time was still clinging too, was essentially out of style. Needless to say, had Lincoln been running today, his campaign manager would have told him he needed to grow some facial hair with most of the voting populace sporting it- particularly because at the time facial hair in America began being associated with radicalism- the Republican party was that.

Instead of campaign manager, it was a little girl who clued Lincoln in that he needed a change. The girl in question was 11 year old Grace Bedell from New York, who sent a letter to Lincoln dated October 15, 1860:

My father has just home from the fair and brought home your picture and Mr. Hamlin’s. I am a little girl only 11 years old, but want you should be President of the United States very much so I hope you wont think me very bold to write to such a great man as you are. Have you any little girls about as large as I am if so give them my love and tell her to write to me if you cannot answer this letter. I have yet got four brothers and part of them will vote for you any way and if you let your whiskers grow I will try and get the rest of them to vote for you you would look a great deal better for your face is so thin. All the ladies like whiskers and they would tease their husbands to vote for you and then you would be President. My father is going to vote for you and if I was a man I would vote for you to but I will try to get every one to vote for you that I can I think that rail fence around your picture makes it look very pretty I have got a little baby sister she is nine weeks old and is just as cunning as can be. When you direct your letter direct to Grace Bedell Westfield Chautauqua County New York.

Apparently not too busy campaigning to answer the letter of a little girl, Lincoln wrote her back from Illinois on October 19, 1860:

Your very agreeable letter of the 15th is received – I regret the necessity of saying I have no daughters – I have three sons – one seventeen, one nine, and one seven years of age. They, with their mother, constitute my whole family. As to the whiskers have never worn any do you not think people would call it a silly affection if I were to begin it now?

Lincoln had numerous documented instances of self-deprecating jokes concerning his less than attractive visage. In one such instance, while publicly debating with his longtime rival Stephen Douglas- after Douglas called him “two-faced”- Lincoln reportedly replied, “If I had another face, do you think I’d wear this one?” (Note: Douglas was not only Lincoln’s political rival, but also a rival outside of politics- Lincoln’s wife, Mary Todd was courted by both Lincoln and Douglas originally.  In the end, Lincoln perhaps wished he’d lost that battle given accounts of his married life- more in the Bonus Facts below.)

Given his attitude about his appearance, it’s perhaps not surprising that despite not definitively saying he would grow a beard, after replying to “little Miss” on October 19, 1860, Lincoln’s facial hair situation went like this (personally, I think he should have stopped at the middle one): 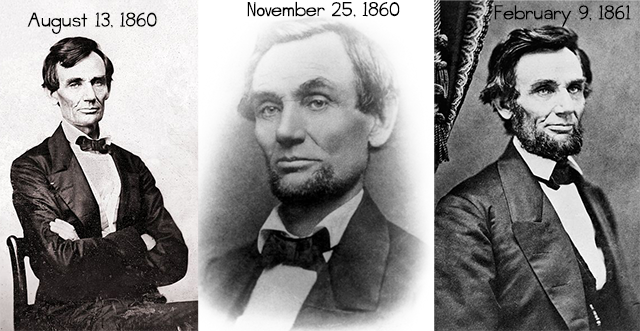 But this isn’t the end of the story. On Lincoln’s trip from Illinois to Washington D.C., the now President-elect made a stop in Westfield, New York on February 19, 1861.

On the train platform, he related the story behind his decision to grow a beard and asked if the little girl in question was in the crowd. She was and approached; at which point, according to Bedell, he said:

‘Gracie, look at my whiskers. I have been growing them for you.’ Then he kissed me. I never saw him again.

After Lincoln, every elected President except William McKinley would sport facial hair. This trend finally ended when Woodrow Wilson took office in 1913. From then on, U.S. Presidents have remained clean shaven.