This Day in History: April 16th 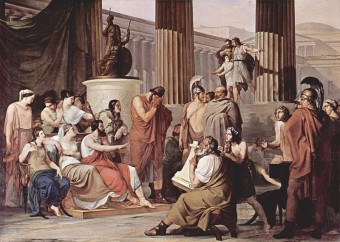 King Odysseus began to make his way home when the Trojan War ended after serving ten years as one of the most distinguished leaders of the Greek Army. Along the way, he had to deal with perils such as the Cyclopes, the Sirens and Scylla and Charybdis. These dangerous distractions added another decade to his journey, and almost made the war look like a good time.

Due to his cleverness and bravery – and with a little help from the deities Zeus and Athena – Odysseus finally made it home to Ithaca on April 16, 1178 B.C.E., no doubt looking forward to putting his feet up, having a nice meal and enjoying a little quality time with the wife.

But Odysseus couldn’t catch a break. His house was filled with guys trying to get with his wife Penelope, who had staunchly remained faithful to him for twenty long years. This didn’t deter the gaggle of her would-be suitors, who crashed at her house, ate her food, terrorized her kid, kept pressuring her to stop mooning over a “dead “ dude and just acted like jerks in general.

Odysseus, who was definitely not in the mood to deal with this nonsense after the commute he’d just had, took in the scene and slaughtered all those presumptuous upstarts. He was finally reunited with the long-suffering Penelope and their son Telemachus, and went into a well-deserved and happy retirement.

This is the story told by the Greek poet Homer in the “Odyssey,” except he did not include the exact date of his hero’s return. Modern scholars have calculated the date using Homer’s references to the positions of the stars and a solar eclipse on the day Odysseus returned to Ithaca.

In the “Odyssey,” Homer writes that the sun was blotted from the sky on the day Odysseus slaughtered all his would-be replacements loitering at his home. He also mentions it was the time of the new moon, a necessary component of a total solar eclipse.

Homer also notes the positions of Venus and Mercury, as well as the constellations Pleiades and Bootes, within a month of the homecoming of Odysseus. This information has led researchers to believe that the exact time of the ancient hero’s return can be pinpointed down to the hour -12 noon.

Historians debated for centuries whether Homer’s epics tales had any historical validity, and the general consensus was that they did not. But in the 19th century, possible physical evidence of the mythical city of Troy, so central to Homer’s “Iliad,” was unearthed. Perhaps not everything Homer wrote was in the realm of myth and fancy?

Even still, the researchers who conducted this study, Marcelo O. Magnasco of Rockefeller University in New York and Constantino Baikouzis of the Astronomical Observatory in La Plata, Argentina, concede that this discovery proves little historically speaking. Magnasco stated:

Under the assumption that our work turns out to be correct, it adds to the evidence that he knew what he was talking about. It still does not prove the historicity of the return of Odysseus. It only proves that Homer knew about certain astronomical phenomena that happened much before his time.

In the end, what we can say for sure is that “historicity” is a word that I will now be using frequently and can’t believe I’ve never come across before. 😉