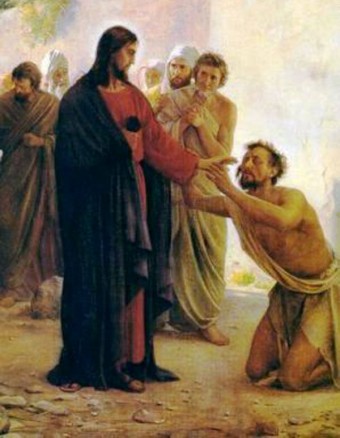 Today I found out what causes leprosy.

Known as Hansen’s Disease, leprosy is caused by a type of bacteria (mycobacterium leprae) that multiplies very slowly. Its incubation period can last up to 20 years and it mainly affects the skin and peripheral nerves. Contrary to the social stigma, leprosy is not highly contagious, and does not cause body parts to fall off. In fact, 95% of the world’s population is naturally immune to the disease and, once diagnosed, a person is easily cured.

Transmission from human to human is through respiratory droplets. It’s also possible get the bacteria from armadillo and other non-human primates. Leprosy, left untreated, causes damage to the nerves, limbs, skin and eyes. This damage gives the patient decreased feeling in the areas affected. The decreased feeling can leave the patient unaware that they have injured themselves and they can get secondary infections. These infections result in the loss of body tissues. Further, the fingers and toes can become shortened and deformed due to cartilage being absorbed back into the body.

Named after Gerhard Henrik Amrmaur Hansen, who was the physician that discovered the bacterium that was the cause of leprosy, Hansen’s disease presents itself differently depending on how a person’s immune system responds. This presentation has made it necessary to classify patients so they can be better treated, based on the progression of their disease. There are two different classification systems in use globally.

The first is the Ridley-Jopling system. This system has 5 categories that describe the patient’s presentation. A person will usually progress through each category as their disease evolves and is treated. This system is used mainly as the basis for clinical studies of leprosy and is the preferred method when assessing treatment needs and risk of complications. The least serious (as evidenced by a person’s resistance to the bacteria) is Tuberculoid leprosy, followed by: Borderline Tuberculoid Leprosy, then Mid-borderline Leprosy, and Borderline Lepromatous Leprosy. The most serious form is the latter Lepromatous leprosy.

The second classification system is easier understood and is used by the World Health Organization (WHO). It classifies leprosy into two different categories defined by the number of skin lesions and the presence of visible bacilli on a skin smear. They are Paucibacillary Leprosy and Multibacillary Leprosy. Paucibacillary simply meaning very few bacilli. Mutlibacillary means more than 6 bacilli present on a skin smear. The most serious of the three classifications of leprosy, in the Ridley-Jopling system, usually fall under the Multibacillary classification. Because this WHO endorsed system is easier and requires no special laboratory equipment, it makes it much more useful to those underdeveloped countries that do not have access to more advanced medical care.

The symptoms of someone with leprosy can be wide ranging. They can start out as mild and progress into presentations that are the subject of misconceptions and folklore. The hallmark signs of leprosy are hypesthesia (an abnormally weak sense of pain, cold, heat, or touch), skin lesions, and peripheral neuropathy.

The first indications someone has leprosy are usually have to do with the skin. Things like painless skin patches (lesions) that are not itchy begin popping up. They tend to be circular with a dry scaly center. These usually first present themselves on the buttocks, face, and the surfaces of limbs. This is because the bacteria prefer cooler zones of the body. In fact, the organisms involved grow best at 80-86 degrees Fahrenheit.

As the disease progresses, the skin’s features like sweat glands and hair follicles are destroyed. Further, the nerves become enlarged and can become quite painful. The patient loses their ability to “feel” and they can injure themselves easily. These injuries lead to muscle atrophy, weakness, and infections. This can cause “foot drop” or clawed hands. Ulcers can also form on the hands and feet.

As the face becomes involved, a person can begin to sound hoarse, loose their eyebrows, and eyelashes. Their nasal cavities may collapse because of the breakdown in the septum. When the eyes become involved in the process, the person can get glaucoma or keratitis. The facial skin can also become thickened and corrugated. Basically, all the horror stories you’ve heard about in the Bible!

“Worry not!”… said the organ donor to the leper! Most people are naturally immune to the disease. Those that are not are easily cured once the disease is diagnosed. In 1991, WHO passed a resolution that would eliminate leprosy as a problem by the year 2000 (the definition of a problem meaning less than 1 case per 10,000 people). Because of the advances in drug treatments and the use of multi-drug therapies, WHO did accomplish their goal. In 1995, they began offering free therapies to any patient in the world who contracted the disease.

Unfortunately, approximately 249,000 people are newly diagnosed with the disease each year mainly in Africa and Asia.  Approximately 150 new cases are reported in the US every year, but don’t go to pieces over it (pun intended)! There have been no known resistant strains of the bacteria to anti-leprosy treatments when a multi-drug therapy is used. A person is also not contagious after a few weeks of the treatment. This, combined with many surgical options that decrease a person’s deterioration and increase their nerve function, give leper colonies everywhere something to party over.