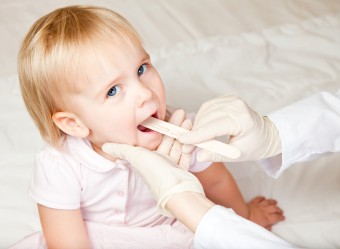 What most people refer to as “tonsils” are known as Palatine tonsils. These are the two large protruding tissues that reside on the sides of the back of your throat. These are actually part of a grouping of lymphoid tissues (tissue that perform different functions for your immune system) known as Waldeyer’s tonsillar ring.

While the Palatine tonsils are the largest part of Waldeyer’s ring, the other parts include the pharyngeal tonsil, also known as the adenoids, Gerlach’s tonsils, which are at the opening between your nasopharynx and your middle ear, known as your eustachian tubes, and the lingual tonsils which are the tissues that resides on the base of your tongue.

Your lymphatic system has many responsibilities that intertwine with each other. Its main responsibility is to collect and transport fluid from all of the inter-cellular spaces of the body (known as interstitial fluid), back to the bloodstream. It’s also responsible for transporting digested fats and large molecules like enzymes and hormones from the places they are created to the bloodstream.

The other thing the lymphatic system does, in reference to the tonsils, is create antibodies that help in building an immunity to infectious diseases. They also help filter out smaller bacterias and toxins.

So to answer your question specifically, the tonsils’ job, in this web of logistical functions, is to create antibodies (immunoglobulins). Most active between the ages of 4 and 10, they have been observed creating a type of lymphocyte (a type of white blood cell) known as a B cell. There are several different types of theses cells and they are programmed to make specific antibodies. One type might make an antibody for bacteria that causes pneumonia, while another might make an antibody for the common cold.

Once created by the tonsils, these B cells will move to the mucus in your upper airway, salivary and lacrimal glands. When it comes in contact with a source that will trigger it, like pneumonia bacteria, it will trigger larger plasma cells to produce more antibodies.

This evolutionary barrier to bacterial attack seems exceedingly important to me. So the question still remains, why did at one time everyone born within ear-shot of a doctor seem to have them removed? Why has this approach suddenly become less common place?

The biggest reason for removing your tonsils (tonsillectomy) used to be their reoccurring infection. This usually occurs between the ages of 4-10 when they are the most active. By the age of 11, your tonsils will begin to shrink and the chance of them becoming infected lessens. One of the main culprits causing your tonsils problems is the streptococcus bacterium (strep throat), and many people can get numerous tonsil infections, even several per year. Before the advent of modern antibiotics, removing them from the equation was the best available treatment for reducing the chance of this painful chronic condition.

The fact that there were relatively low complication rates to a tonsillectomy helped make this procedure commonplace until recently. With the introduction of antibiotics, it has now become easier to treat tonsillitis with antibiotics as opposed to surgery. Dr. Chris Johnson states, “I first trained and practiced as a pediatric infectious disease specialist, and I was consulted many times about such children (tonsillitis patients). My bias was nearly always against tonsillectomy. My reason, shared by most infectious disease experts, was that we have effective antibiotics to treat strep. Why risk the surgery?”

I know what you’re thinking. Why would you want to remove any tissue that helps fight infection? The answer is that most people have no increase in the risk of other body infections when the tonsils are removed. This is why it’s still a common procedure for afflictions like reoccurring tonsillitis that does not respond to antibiotics, tonsil abscesses that do no respond to drainage, too large of tonsils that can affect nighttime breathing, or tumors of the tonsils.