What Exactly is Malt? 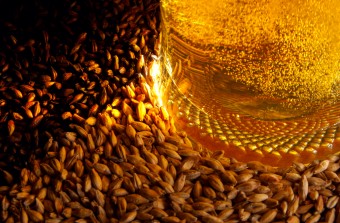 For millions of drinkers, it is perhaps the most important ingredient in the world.

Malt is the product that is left over after a cereal grain has been dried, allowed to sprout, air dried again, then heated in an oven.

Any of a variety of cereal grains, including rice, wheat, oats and rye can be used to make malt. The most common by far, however, is barley, which is the primary grain used in the production of most beers and the majority of malted whiskeys.

Why Is It Made?

Malting a grain has two advantages.

Prepares Starch for Conversion to Sugar

Sometimes, the maltster wants to bring malt “to its highest point of possible soluble starch content.” This is done by heating the grain just to the point where the growth process stops, but still “allows a natural enzyme, diastase,” to be ready to convert that starch to sugar.

Used in fermentation processes (think beer, whiskey and vinegar), the soluble starch is added to water where diastase turns it into sugar. This sugar-water is fed to yeast, which metabolize the sugar into CO2 and alcohol.

Malt prepared in this way imparts a sweetness to the final product.

Malting isn’t necessary for fermentation, and many alcohols are made without malt grains. Nonetheless, it is a helpful tool as it: “prepares the starches for conversion, and then stop this action [turning starch into sugar] until the brewer [or distiller] is ready to utilize the grain.”

Sometimes, grains are malted past the point where the enzymes remain active in order to impart a roasted flavor, and color, to the final product. This flavoring malt is the kind typically used in malted milk powders.

Where Is It Used?

Malt is used in a variety of products, although it is most commonly found in drink form, with the notable exception of malted milk balls.

As shown above, malt is present from the beginning of the beer making process. It is an essential ingredient in the making of the wort, the sugar-saturated liquid produced after the malt has steeped in hot water, allowing the diastase to do its work.

Yeast is added to the wort and transforms it into alcohol in stages: (1) during the first “lag” phase, the proteins in the sugar are broken down into amino acids; (2) next, in the “respiration” phase, the yeast breathes in O2 which makes the wort more acidic; (3) then sugars are transformed into CO2 and pyruvic acid; which (4) ultimately turns into the alcohol we lovingly call “beer.” Some sugar is not metabolized by the yeast, which explains why beer may have a sweet flavor.

There are three by-products the yeast produce that may affect the flavor of the beer: Diacetyls produce a “woody” taste, esters leave a fruity taste, and phenols have a spicy or even medicinal flavor.

Not all whiskeys use malt. Those that do go through a process that is similar to beer, until the distillation starts. Recipes may differ, but the process is generally like this one used for making Scotch whiskey:

When the [malted] barley is dry it is then milled to produce a floury substance known as “grist” . . . . which is rich in sugar [and] mixed with hot water to create a “mash” . . . . The . . . mash is stirred regularly to encourage the release of the sugars. When this process is complete the resulting liquid . . . “wort” is . . . transferred to large wooden “washbacks” [where] the yeast is added.

At the end of fermentation, the “wash” is not much higher in alcohol than beer, about 8-9%. It is then transferred to a first copper pot, called the wash still, where the liquid is heated and distilled. (In distillation, the heat evaporates the liquid, which floats up and through a pipe where it reaches a second vessel. There the vapor cools and condenses back into a liquid).

The first part, the “foreshot” is too strong and contains undesirable components. The next part, the “middle cut” is what we are looking for . . . [and] is diverted to a receiving tank. The final part . . . the “feints” is too weak to be used but it is saved [and] added to the next batch.

The middle cut is placed in oak barrels or casks that were previously used to mature Bourbon, Rum, Sherry or Port. Whiskey is typically aged for years, and by some accounts, “2% is lost through evaporation each year.” This loss, which can really add up for longer-aged whiskeys, is called the angel’s share.

The distinctive flavor of malted milk balls (think Whoppers) comes from the addition of malted milk – “a .. . mixture of malted barley, wheat flour, and whole milk, which is evaporated until it forms a powder.”

Useful in a variety of products, malted milk powder can be purchased in grocery stores and added to a variety of drinks (like milkshakes) as well as baked goods and other recipess

The source of the crummy commercial that made Ralphie swear, powdered and fortified Ovaltine gets its distinctive flavor from barley malt extract. Although for over 100 years moms have served this drink to their children because of its nutritional benefits, those same supplements have recently caused the company trouble. According to news reports, Canada has banned Ovaltine because it is “‘enriched with vitamins and minerals’ and therefore illegal,” due to certain ingredients being unapproved. Who knew?

Made in much the same process as beer (at least at first), malt (from barley or another grain) is mixed with water, the starches are broken into sugar, the sugars are fed to yeast, and the yeast produces alcohol.

Then, a particular kind of bacteria known as Acetobacter “converts the alcohol portion to acid.” Left on a counter at room temperature, this mixture:

Will be converted to vinegar in months [although] the industrial process can be completed within hours since air is bubbled and mixed through the solution.