Alcohol Doesn’t Really “Cook Out” of Food in Most Cases 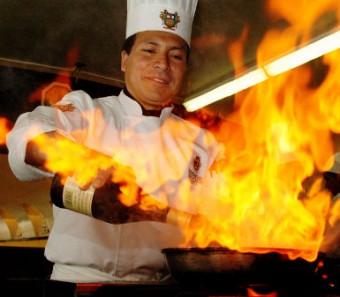 A group of researchers in 1992 at the U.S. Department of Agriculture, the University of Idaho, and Washington State University decided to find out.  In the end, what they discovered was that the “alcohol cooks out” assumption didn’t turn out to be correct for the vast majority of ways most people prepare food with alcohol.  In their study, they used a variety of recipes with various sources of alcohol and a variety of preparation types, including simmering, baking, flaming, refrigerating over night, etc.  What they found was that the amount of alcohol remaining after cooking was in the range of 4%-85%.  The variations weren’t just dependant on how long you kept the temperature above alcohol’s boiling point either.  They also found that the other ingredients made a difference in the alcohol retention rate.  The size of the cooking vessel also greatly affected the alcohol retention rates.  The smaller the vessel, the more alcohol will be retained given some set cooking time, due to the smaller surface area for evaporation.

In terms of preparation methods and times, their results were as follows (all of these assume the temperature is above 173° F, which is the boiling point of alcohol; also, the size of dish and contents of the food mixture affect the results, so this is just a general guideline):

Now, you might think from this that if you cooked the thing long enough, eventually the alcohol will all get cooked out.  From a practical standpoint, this is more or less true.  But if you are ever cooking for or are a recovering alcoholic, you’ll want to know, it’s not really true.  There will always be some alcohol remaining as long as there is still any kind of moisture in whatever you are cooking.   The reason behind this is that the alcohol binds with water and forms an azeotrope (mixture of two or more compounds where the ratio cannot be changed by simple distillation).  So as you boil the azeotrope, the ratio of alcohol in the compound stays the same throughout the boiling process.   So you will always retain some alcohol, unless you boil off all the liquid.