December 11, 2012 Daven Hiskey
Rob asks: What is eggnog actually made of? Does it really have raw eggs in it? 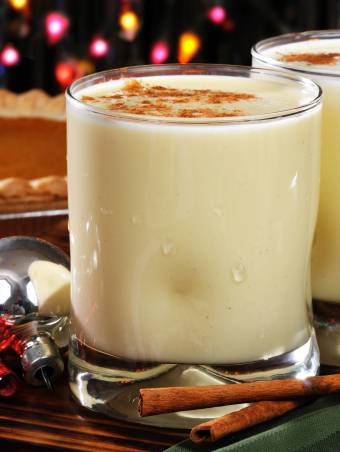 Traditionally, yes, eggnog included raw eggs.  However, some countries today, such as the United States, severely restrict the use of raw egg in products, due to health concerns; thus, most commercial eggnog does not include raw eggs. (The FDA actually limits the egg yolk solids in eggnog to less than 1%.)  You can, however, buy pasteurized eggs first before making your own eggnog (or partially cook the raw egg in milk to make a custard), but eggnog connoisseurs tend to frown upon this as it supposedly alters the flavor and consistency of the final product.

As to what typical ingredients are included in eggnog, these are: milk; cream; sugar; some sort of an alcohol like rum, brandy, vodka, cognac, or whiskey; whipped eggs; and sometimes nutmeg, cinnamon, or other spices.  While today eggnog you buy in the store often excludes the alcoholic ingredient, traditionally this was always included and was half the point of eggnog.

Now you might be wondering where eggnog actually came from?  I mean, who sat there and thought to themselves, “You know what would be good?  Mixing raw excretions from a cow’s udder and a chicken’s cloaca with some sugar, alcohol, and spices.”  It isn’t known exactly who was the first to do this, but eggnog seems to have originated in Europe around the 17th century, very possibly in England.

It was generally only drunk by the extremely wealthy due to the need for eggs and milk which were a rarity for commoners in Europe at the time.  Before eggnog, it was fairly common to mix milk with wine and other alcohol to make various forms of milk punches, including possibly the direct ancestor of eggnog, “posset”, which was a drink served hot that included milk and eggs mixed with wine or beer.

Sometime around the 18th century, eggnog made its way to the Americas, where its popularity was much more widespread due to more people having direct access to cows and chickens (more commoners owned farms).  As brandy, the alcoholic ingredient of choice in England, was somewhat expensive to get in the Americas from heavy taxing and lack of availability, the much cheaper and readily available rum became a popular substitute there.  This later changed to whiskey and bourbon.  George Washington himself had his own little recipe for eggnog which included not just rum, but sherry and whiskey too.

As to the name of “eggnog” the origins are somewhat disputed, but obviously the first part comes from the egg ingredient.  The origin of the second “nog” part is slightly murkier. It possibly derives from the Middle English word “noggin”, which originally referred to a small wooden mug and later any small container used to serve strong alcoholic beverages.  “Noggin” may or may not have derived from “nog”, referring to a certain type of beer brewed in East Anglia in the 17th century that had a high percentage of alcohol content compared to most beers.

A much less plausible theory often put forth as to the origin of the name “eggnog” is that it comes from the Americas and was from “Egg ‘n Grog”, referring to the rum ingredient in the Americas, being morphed to “eggnog”.

Whatever the case, the word “eggnog” started popping up around the very early 19th century on both sides of the pond, though the British still sometimes called it “Egg Flip”, referring to the process of mixing the ingredients