Were Footballs Ever Really Made of Pigskin?

January 31, 2014 Emily Upton
Katlen asks: Is it true that footballs used to be made of pigskin? What are they made of now? 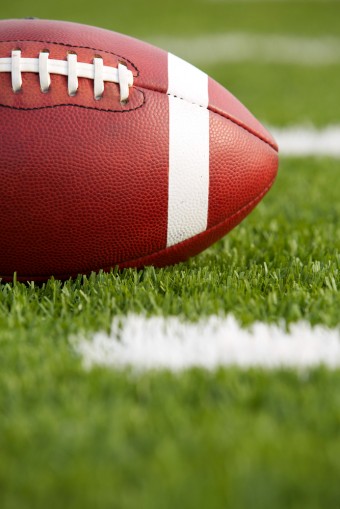 These days, footballs are typically made from cowhide or vulcanized rubber, making their nickname “pigskins” somewhat ironic. Football fans often perpetuate the idea that footballs used to be made of pigskin, which is how they got their nickname, but it turns out this isn’t the case.

In fact, “pigskins” were originally made out of animal bladders—sometimes the bladder of a pig, which is thought to be how the moniker “pigskin” came about. Animal bladders were much more accessible to the average team than more expensive items like leather. When the bladder was inflated, it was mostly round and served well as a ball for gameplay.

The only trouble was actually inflating it, which was a pretty disgusting task as you can probably imagine. Sometimes the bladder would be stuffed with things like straw or scraps of other material, but stuffing rather than inflating tended to lead to a strange shape that didn’t work quite as well in certain sports. Later on, the animal bladders were sometimes encased with leather of some type, though pig skin wasn’t commonly used.

Luckily for all of the pro and casual football players out there, the practice of blowing up bladders to play ball fell out of practice sometime in the 1860s, around the time American Football was taking its first steps branching off from Rugby. This switch in material of the ball can be explained by the invention of vulcanized rubber in by Charles Goodyear in 1844.

Eager to ditch the gross task of inflating the bladders, footballs started being made with rubber and cowhide, which made the sport a much more pleasant experience for everyone involved. It is likely that rubber footballs started to be used shortly after Goodyear patented vulcanized rubber, but animal bladders were still relatively commonly used into the 1860s.

Since 1955, the official NFL footballs have been made at the Wilson factory in Ada, Ohio. Each football is handmade from cowhide sourced from Kansas, Nebraska, and Iowa. The hides are tanned in Ada with a “top secret football-weather-optimizing tanning recipe.” 130 people working at the factory produce nearly 4000 footballs every day. Each football is made up of four pieces and a synthetic bladder, and each cowhide can usually make up to 10 footballs.

Another question often associated with what a football used to be made out of is, “How did American footballs get their shape?” As you probably know, footballs are pointy at the end and rounder in the middle (known as a prolate spheroid). Turns out, this shape wasn’t for aerodynamics (the forward pass wasn’t introduced until 1906) or ease of holding it on long runs to make a touchdown. Rather, it happened purely by accident. As one witness of the Princeton-Rutgers game in 1869 remembered,

The ball was not an oval but was supposed to be completely round. It never was, though — it was too hard to blow up right. The game was stopped several times that day while the teams called for a little key from the sidelines. They used it to unlock the small nozzle which was tucked into the ball, and then took turns blowing it up. The last man generally got tired and they put it back in play somewhat lopsided.

This difficulty with the shape of the inflated ball continued on; by the time the quality of the ball’s manufacturing had improved sufficiently to get the shape right, the oblong shape had been the norm for so long it stuck, with only slight tweaks to make it a little more pointy happening over time. The rest, as they say, is history.