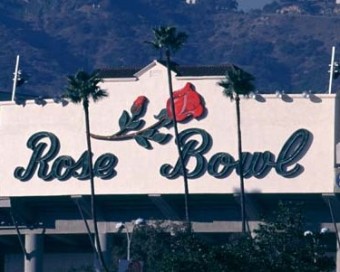 Today I found out why championship football games are called “bowls”.

In 1901, the Roses Association sponsored a college Tournament East-West football game between Michigan and Stanford.  In this game, Stanford quit in the third quarter, being down 49-0.  For the next 15 years, this annual event stopped featuring football, rather featured other events such as chariot racing.  However, in 1916, the Roses Association decided to sponsor a football tournament once again, this time between WSU (then called The State College of Washington) and Brown.  This game was held at Tournament Park in Pasadena, as were subsequent annual matches.  Fast-forward five years and they had need of a stadium to play the game at, with attendance for this tournament having swelled massively.

Myron Hunt was commissioned to design a stadium for this purpose which was completed two years later and named Rose Bowl.  Like many other college football stadiums after, Rose Bowl was modeled after the design of Yale’s stadium, Yale Bowl, which got its name from the fact that it resembled a bowl, much like Rose Bowl.  This tournament sponsored by the Roses Association then was named the “Rose Bowl”, after the stadium.

Gradually other cities and universities with football teams saw the money making opportunities and promotional value of these tournament games and began creating their own “bowl” games, even though many of these games were not played in bowl shaped stadiums.

The NFL eventually borrowed this terminology when they created the Pro Bowl in 1951.  In 1970, the AFL and NFL merged and they created a championship game called the “AFL-NFL World Championship Game”.  This game was called such for two years while the final details of the merger were being worked out.  Upon the third “AFL-NFL World Championship Game” the merger was complete and this championship game was re-branded the “Super Bowl”, after the college naming convention.  This third match-up, being called “Super Bowl III”, also set the tradition of using Roman numerals for the Super Bowl, rather than the year of the game.