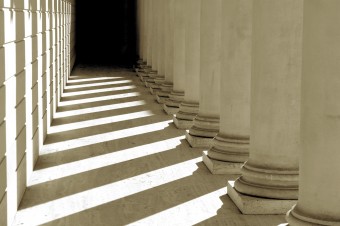 Today I found out about a man who fairly accurately estimated the circumference of the Earth well over 2,000 years ago: Eratosthenes of Cyrene.

Born around 276 B.C. in Cyrene, Libya, Eratosthenes soon became one of the most famous mathematicians of his time. He is best known for making the first recorded measurement of the Earth’s circumference, which was also remarkably accurate.  (And, yes, people at that point had known for some time that the world wasn’t flat, contrary to popular belief.)

Eratosthenes was able to accomplish this in part because of his education in Athens. There, he became known for his achievements in many different fields, including poetry, astronomy, and scientific writing. His activities became so talked about, in fact, that Ptolemy III of Egypt decided to invite him to Alexandria to tutor his son. Later, he would become the head librarian of the Library of Alexandria.

The mathematician must have been thrilled to have this opportunity. The Library of Alexandria was a hub of learning at the time, attracting scholars from across the known world. Eratosthenes was able to rub shoulders with the likes of Archimedes while continuing his own learning.

It was probably in the Library of Alexandria that he read about a curious event that took place in Syene (now Aswan, Egypt) at the summer solstice. Syene sat to the south of Alexandria. At high noon, the sun would shine directly overhead and there would be no shadows stemming from the columns. However, Eratosthenes realized that at the same moment in Alexandria, columns clearly did have shadows. Being a good mathematician, he decided to use this knowledge to do a few calculations to figure out the circumference of the Earth.

To do this, Eratosthenes measured the shadow of an obelisk on June 21 at noon. He discovered that the sun was about 7°14’ from being directly overhead. He realized that, because the Earth is curved, the greater the curve, the longer the shadows would be.

Based on his observations, he hypothesized that Syene must lie 7°14’ along a curve from Alexandria. Furthermore, he knew that a circle contained 360°, which meant that his calculation—7°14’—was roughly one fiftieth of a circle. Therefore, Eratosthenes thought, if he multiplied the distance between Syene and Alexandria by 50, he would have the circumference of the Earth.

The missing information was simply how far away Syene was from Alexandria. He measured the distance in stadia. There isn’t an exact modern day conversion to stadia, and it isn’t perfectly clear which version of the stadia Eratosthenes was using, but regardless, from what is known, his estimation was remarkably accurate.

There are two theories as to how Eratosthenes figured out the distance: first, that he hired a man to walk there and count the steps. Second, that he heard a camel could travel 100 stadia a day, and it took a camel about 50 days to travel to Syene. Whatever the case, he estimated the distance between Syene and Alexandria was 5,000 stadia. If that was the case, then using his formula, the earth was 250,000 stadia around.

Due to the uncertain distance that stadia represents (and particularly which stadia he was using), historians believe that Eratosthenes’ conclusion was between .5% and 17% off the mark. Even if the latter case was true, it was astoundingly accurate given the limited technology he was dealing with at the time. But many scholars think it likely that he was using the Egyptian stadia (157.5 m), being in Egypt at the time. This would make his estimate only about 1% too small.

There had been previous attempts at discovering the Earth’s circumference (which don’t count as “first recorded” because their methods didn’t survive, though we have references to them) which resulted in a 400,000 stadia figure, 150,000 more than Eratosthenes’—obviously far from accurate.

While finding the approximate circumference of the Earth was probably Eratosthenes’ largest contribution to scholarship at the time, it was by no means the only one. Eratosthenes is also credited with coming up with a way to map out the known world by drawing lines north-south and east-west—early latitude and longitude lines. However, these lines were irregular and often drawn through known places, meaning they weren’t entirely accurate. Nevertheless, it provided a precursor for maps we know today.

He is also remembered for the Sieve of Eratosthenes, a simple algorithm that makes it easy to find all prime numbers up to a certain limit. Though none of Eratosthenes’ personal work on the sieve survives, he was credited with the creation of the algorithm by Nicomedes in his Introduction to Arithmetic.

Not only that, but Eratosthenes estimated the distance to both the sun and the moon, and measured the tilt of the Earth’s axis all with amazing accuracy.

He also wrote the poem Hermes, correctly sketched the route of the Nile, and even gave a more-or-less accurate account of why the Nile flooded, something that had baffled scholars for centuries. He worked on a calendar that included leap years and he also estimated and corrected the dates of various historical events beginning with the Siege of Troy.

Despite these accomplishments and many more like them, Eratosthenes was often nicknamed “Beta.” Beta is the second letter in the Greek alphabet and referred to Eratosthenes being second-best in everything he did.

Eratosthenes died around 194 B.C. and is thought to have starved himself to death. It is believed that he started going blind in his later years and, unable to continue his work, he simply stopped eating.