Ancient Origin of the Word ‘Diarrhea’ and Other Common Medical Terms 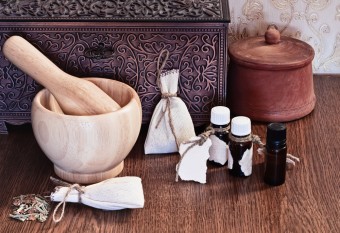 Human beings have suffered from many of the same chronic illnesses and conditions since the dawn of recorded history. In fact, many of the words we use to describe medical maladies today date back to the birth of classical civilization, when Greek and Roman physicians first began studying medicine.

The original Greek word, aazein, meant to pant or exhale open-mouthed, and its earliest appearance was in Homer’s Illiad (circa 800 BC) where Hector is described as: “ho d’argaleoi echet’ asthmatic . . . . haim’ emeon” (he was gripped by difficult asthma, vomiting up blood.)

As an official medical term, however, asthma didn’t first appeared in the 4th or 5th century BC in “the Hippocratic corpus [where] the word is used to mean accelerated difficult breathing or shortness of breath, definitely a clinical symptom.”

This Hippocraticic Corpus is a group of medical writings, often attributed to the “father” of modern medicine, Hippocrates (450 -380 BC); more likely, however, the works were written by a series of different authors over several centuries, collectively called the Hippocratics.

Regardless, historians are unable to determine if “by the term asthma [the Hippocratics] meant a separate clinical entity . . . or they meant plainly a symptom.”

Nonetheless, the first clear description of asthma as a chronic condition is given by Aretaeus the Cappadocian in the 1st or 2nd century AD:

Heaviness of the chest, sluggishness to one’s accustomed work and to every other exertion, difficulty of breathing in running or on a steep road, they are hoarse and troubled with cough, flatulence and extraordinary evaluations of the lypochondriac region . . . .

The cheeks are ruddy, eyes protuberant, as if from strangulation, a råle during the waking state . . . they breathe standing, as if desiring to draw in all the air which they possibly can inhale, and, in their want of air they also open the mouth as if thus to enjoy the more of it . . . cough incessant and laborious, expectoration small, thin, cold, resembling the efflorescence of foam, neck swells with the inflation of the breath . . . .

Although they did not use the term, some say the Hippocratics were the first to diagnose this condition that includes polydypsia (taking in too much fluids due to a pathologically excessive thirst), polyuria (abnormally excessive urination), polyphagia (excessive appetite) and, hold on to your hats, “a sweet taste to the patient’s urine.”

Others disagree and identify Aretaeus as the first to describe the chronic condition. In any event, his use of the term “diabetes,” Greek for “siphon,” is apparently first recorded:

Diabetes is a wonderful affection . . . being a melting down of the flesh and limbs into urine. . . . The course is a common one namely, the kidneys and the bladder; for the patients never stop making water, but the flow is incessant , . . . Moreover, life is disgusting and painful; thirst unquenchable; excessive drinking . . . disproportionate to the large quantify of urine . . Hence, the disease appears to me to have got the name diabetes as if from the Greek word [for] siphon, because the fluid does not remain in the body.

Hippocrates (or the Hippocratics) is (are) universally credited for coining the term diarrhea. Derived from the Greek word diarrhoia, which means “flowing through,” the term is found in numerous places in the Hippocratic corpus, as it is a symptom of a variety of diseases (also first identified by Hippocrates) including its relationship with poor food handling, intestinal parasites, jaundice, dysentery and cholera.

In his Aphorisms, Hippocrates famously said, “In confirmed diarrhoea, vomiting, when it comes on spontaneously, removes the diarrhoea.”

Once again, Hippocrates is credited with introducing this medical term. Derived from the Greek words carcinos (non-ulcer forming tumor) and carcinoma (ulcer-forming tumor), both terms reference the crab, due to the shape of many cancers.

The later Roman physician, Celsus (25-50 BC), author of De Medicina, is said to have Latinized carcinos into cancer, to refer to more malignant cancers, while retaining the word carcinoma to describe less serious lesions. Celsus chronicled his observations, that some today believe includes the first description of breast cancer:

A carcinoma does not give rise to the same danger unless it is irritated by imprudent treatment. This disease occurs mostly in the upper parts of the body, in the region of the face, nose, ears, lips and in the breasts of women, but it may also arise in ulceration, or in the spleen.

Discovery, Treatment and Management of Diabetes

The History of Cancer

Insights into Infectious Disease in the Era of Hippocrates

On the Term Diabetes in the Works of Aretaeus and Galen

Origin of the Word “Asthma”