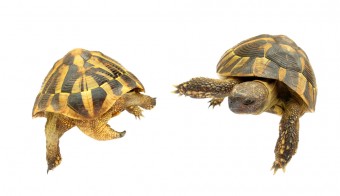 Due to copyrights, this is the closest we can come to a TMNT picture… 😉 Fight!

For anyone of a certain age, Saturday mornings in the 90s were holy. It was a time to sit in front of the TV in your Pee Wee Herman PJs, eating your Cap’N Crunch, and watching back-to-back episodes of Garfield and Friends, X-Men, Bobby’s World, and Where in the World is Carmen Sandiego?. But there was one Saturday morning program that boys and girls (okay, mostly boys) all across the country waited all week to watch. They were lean. They were mean. And they were green, crime-fighting machines. They were the Teenage Mutant Ninja Turtles.

TMNT (as the fans call it) was a very strange, quirky, and goofy, animated television series that originally ran on CBS from 1987 to 1996, a ten season run with 193 episodes. The show spawned four movies, several more television incarnations, millions of dollars of merchandise, and legions of fans. But to get to the true origin of the Teenage Mutant Turtles, we need to start with two young, struggling comic book artists living in Northampton, Massachusetts and borrowing money from their uncle.

Kevin Eastman and Peter Laird were both living in the western part of Massachusetts in their 20s in 1983, trying to make a living doing illustrations for local newspapers and fanzines.  A few years earlier, Peter and Kevin had met through their comic book mutual connections. They reconnected again while Peter’s wife attended grad school and Kevin was cooking lobsters at a local restaurant. Soon, they became sketching buddies. One day, they were hanging out around Peter’s kitchen table when Kevin drew, as a joke, a picture of a turtle standing on his hind legs and wielding a pair of nunchucks and calling himself a “Ninja Turtle.” Peter, getting a kick out of this, drew several other “Ninja Turtles” and tacked on the words “Teenage Mutant” to the beginning.  And that’s how a billion dollar franchise was born.

Kevin and Peter thought enough of those casual drawings that they decided to self-publish a one-off comic based around these characters under the banner of Mirage Studios, aptly named because there was, in fact, no studios other than Peter’s kitchen table. In March 1984, using Kevin’s $500 tax refund, Peter’s entire bank account (containing a cool sum of $200), and borrowing $1500 from Kevin’s uncle, they printed 3,000 copies of their first comic book together, Teenage Mutant Ninja Turtles.

After doing this, they had enough money left over to run an ad in the industry publication Comics Buyer’s Guide. Within a few months, they not only had sold out their first 3,000 copies at a price of a $1.50 each, but they had to print an additional 6,000 copies to keep up with the demand. Needless to say, by the summer they were able to pay back Kevin’s uncle and even were able to split a tidy profit of $200. By January 1985, they had published issue #2 and immediately  sold 15,000 copies. From there, the Teenage Mutant Ninja Turtles were off and karate chopping.

Kevin and Peter’s first issues of Teenage Mutant Ninja Turtles were actually very dark and never meant for children. They were meant to parody (or pay homage to) four of the more popular comics of the time: Marvel Comics’ Daredevil and New Mutants; Dave Sim’s Cerebus; and Frank Miller’s Ronin. There was blood, over-the-top violence, and cursing.

The drawings of the four turtles were actually based on terrapins, a type of freshwater turtle. (See the difference between turtles, tortoises, and terrapins) They were named after famous Renaissance-era artists because, despite their Japanese fighting style, Kevin and Peter thought “Japanese names would feel strange to American readers” and they had both studied art history in college.

The first editions of Teenage Mutant Ninja Turtles consist of many of the characters that are now part of TMNT lore, like a mutated rat sensei Splinter, the villain Shredder and lab assistant April O’Neil. (She would become a TV news reporter in later incarnations). Some characters never made it past the early years, like Radical (otherwise known as Dr. Hazel McIntyre) who was given the power of “liquid energy” after being struck by lightening.  Another defunct character was Bloodsucker, a mutated leech that was, originally, used by the turtles to get back at Raphael for disobeying Splinter, but the leech went rogue.

In 1986, Playmate Toys became interested in developing these characters into a line of action figures.  So Peter and Kevin decided to hire a licensing agent, Mark Freedman, to help with the merchandising and licensing deals. Freedman has since been credited with developing and expanding the Turtles into the international brand we all know today. Before Playmate Toys would commit to making a whole line of toys, they wanted to see how the Turtles would appeal to their target audience- kids. In order to do this, the Turtles had to be “softened up” a bit. This meant turning the Turtles into pizza-loving goofballs who fought incompetent cartoon idiots and, instead of shouting “Holy Hell” or “Damn,” they now dropped classic catchphrases like “Cowabunga” and “Turtle Power.”

After a five part mini-series in December 1987 that proved to be quite popular, the Teenage Mutant Ninja Turtles became a regular Saturday morning staple. After 4 movies, hundreds of toys, 4 more television series, 14 video games, 6 different food tie-ins, and even a concert tour (more about this below), the Teenage Ninja Mutant Turtles have remained relevant and popular over the last 27 years. Here’s to hoping that in the years to come, kids will still wake up early Saturday morning, wearing their Pee Wee Herman PJs (okay, maybe not), and plop themselves in front of the television to watch the “Heroes in a Half-Shell.”