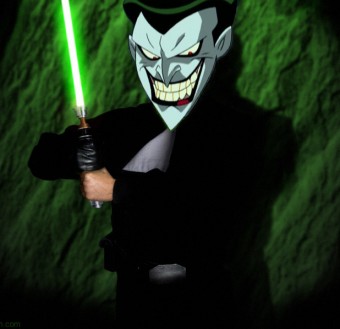 Today I found out Mark Hamill currently holds the record for playing the Batman character of “Joker” longer than any other actor and in more spinoffs.

“I’ve never seen him play the Joker”, you say?  It’s because Mark Hamill has been doing the voice of the Joker on a variety of animated TV shows, movies, and video games for the last two decades.

Mark Hamill is today one of the most prolific voice actors in Hollywood.  In the last decade alone, he’s done well over 100 different voice acting roles in a variety of TV shows, video games, and movies, including in Ultimate Spider-Man, Scooby-Doo, Robot Chicken, The New Woody Woodpecker Show, Tigger & Pooh and a Musical too, Avatar: The Last Airbender, My Friends Tigger & Pooh, SpongeBob SquarePants, Call of Duty 2, Family Guy, Stuart Little… the list goes on and on and on.

Hamill got his start doing voice acting in a film that was released the same year as Star Wars: A New Hope, the cult classic film Wizards.  In Wizards he played the role of “Sean, leader of the Knights of Stardust”.  The character was even drawn to look somewhat like Hamill.

He got his start doing the Joker in the Emmy award winning 1992 Batman: The Animated Series. He’d previously done the voice for the character of Ferris Boyle in the Batman episode “Heart of Ice”, when Tim Curry decided to opt out of doing the voice of Joker; so they gave the role to Mark Hamill.  He has since reprised his role as the voice of Joker in the TV shows Superman: The Animated Series, The New Batman Adventures, Static Shock, Justice League, Birds of Prey, and Robot Chicken. He’s also done the voice of Joker in the movies Batman: Mask of the Phantasm and Batman Beyond: Return of the Joker, as well as in video games, such as Batman Vengeance, The Adventures of Batman & Robin, Batman: Arkham Asylum, and Batman: Arkham City.  Finally, Hamill lent is voice to various toys and amusement park rides that feature the voice of Joker.

As to the inspiration for his now famous version of the voice of Joker, Hamill stated in an interview that he was going for a cross between Hannibal Lecter and Jerry Lewis.

I’ve been married to a dental hygienist for years and if you think I haven’t heard “Use the Floss”, you’d be mistaken. [He married dental hygienist Marilou York in 1978.  They are still married and have three children.]

You know how there are some stars out there who know how to market themselves? I don’t have that.

I can’t tell you how many people have said, ‘I got into the business because of that movie.’ … I totally understand that because I remember walking out of Jason and the Argonauts and saying, ‘I don’t know how they got those skeletons to fight, but someday I want that to be my job. To make skeletons fight.’

I can’t tell you how much we laughed on the set to have Alec Guinness in a scene with a big, furry dog that’s flying a space ship.

You know where [the pride] comes from? It’s not so much from the industry… but the 9-year-old kid who looks at you like a cross between Superman and Santa Claus. And you’d have to be a really, really hardened cynic not to be moved by that.