Robert Downey Jr. Modeled His Portrayal of Tony Stark After Elon Musk, One of the Founders of Zip2, Paypal, Tesla Motors, Solar City, and SpaceX 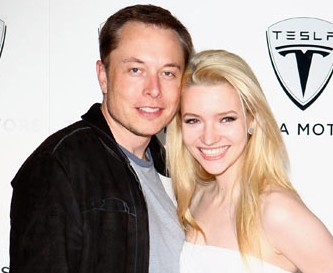 Today I found out Robert Downey Jr. modeled his portrayal of Tony Stark after Elon Musk, one of the founds of Zip2, Paypal, Tesla Motors, Solar City, and SpaceX.

During the planning stages of Iron Man, after Downey Jr. had been cast, director Jon Favreau and Downey Jr. sat down to discuss how to make a really believable Tony Stark character that the audience could connect with.  Downey Jr. suggested that the best way to do that was to go and sit down with Elon Musk, a sort of real life Tony Stark, and observe his various mannerisms, as well as pick his brain on the subject.

After meeting Musk, Favreau was very impressed and Downey Jr. and he decided to go ahead and base parts of the Tony Stark character on Musk.  As Favreau stated: “Elon Musk makes no sense — and that’s the reason I know him. When I was trying to bring the character of genius billionaire Tony Stark to the big screen in Iron Man, I had no idea how to make him seem real. Robert Downey Jr. said, ‘We need to sit down with Elon Musk.’ … Downey was right. Elon is a paragon of enthusiasm, good humor and curiosity — a Renaissance man in an era that needs them.”  The resulting Tony Stark character was then just more or less a more flamboyant version of Elon Musk, with some of the extra flamboyance being inspired by Oracle CEO Larry Ellison.

Musk began his very impressive entrepreneurial career in South Africa.  At the age of 10, he saved up and bought his own computer.  He then taught himself how to program and, at the age of 12, created a computer game called “Blaster” that he managed to sell for $500 to a computer magazine.  His next venture was to use those funds to start an arcade.  However, he was unable to get a permit, due to his age, and so started a home-made chocolate selling business instead, which he ran for a time, selling to classmates.  By the time he graduated, with these ventures and proper investment in the stock market, this resulted in his net worth already being in the several thousand dollar range.

His next venture earned slightly more by the time he sold it.  After earning a bachelor’s degree in Physics and a bachelor’s degree in Economics, he then decided to pursue a PhD in physics and materials science.  However, he became intrigued with the potential of the Internet and decided a window was open to do some incredible things with the internet and so dropped out of the PhD program after only 2 days and started Zip2 instead.  Zip2 was more or less an online content publishing portal and directory, though Musk originally had much bigger plans for it, more along the lines of something like Yahoo, but was ultimately blocked from implementing those plans by other shareholders.  Even so, four years after it was founded, Zip2 sold for $341 million to Compaq’s AltaVista.  Musk was entitled to around $22 million of that $341 million.

Rather than sit around and swim in his new-found vault of money, Musk instead immediately got involved in co-founding a company called x.com, which would later become Paypal when it merged with Confinity.  Three years later, Paypal was acquired by eBay for a cool $1.5 billion with Musk this time being entitled to around $176 million as Paypal’s largest shareholder.

Once again Musk didn’t take a break and this time founded Space Exploration Technologies (SpaceX), which recently became the first non-government entity to successfully use a liquid fueled rocket to put a satellite in orbit.   Not only were they able to do this, but they also were able to do it at a drastically reduced cost per launch by designing a new type of rocket more or less from scratch.  They also recently were granted a $1.6-$3.1 billion contract from NASA for 12 flights to the International Space Station.

If being the CEO and CTO of SpaceX wasn’t enough, Musk decided to lend his Midas touch to the world of electric cars and got involved with co-founding Tesla motors as the chairman of the board and head of product design.  Today he’s also the CEO.

During this time period, he also helped found Solar City, which is now the largest solar system provider in the United States.  They help design systems for businesses and home use, as well as provide financing and installation services.  They also are involved in creating charging stations in the U.S. for electric vehicles.

So after 38 years on this planet, Musk managed to design and sell a video game; earn two bachelor degrees; help design and sell one the web’s first major online content publishing platforms; helped design and implement Paypal, the world’s largest internet payment platform; helped found what is now the U.S.’s largest solar system provider; helped design a new kind of rocket from the ground up that managed to cut the cost of launching cargo into space by a huge margin, was the first such commercial liquid fueled rocket to put a satellite in orbit, and will now be used by NASA for their missions; and helped design and build the first commercially viable electric car to come out in the last century.  More remarkable than that is he did the latter five things on that list in a span of only around 14 years.  Not a bad base-model for the character of Tony Stark.

Musk actually appears in the movie Iron Man 2 with a brief cameo where he tries to pitch Tony Stark on making an electric jet plane.  This cameo happens during the restaurant scene shortly before Stark goes out and becomes the driver of the Formula 1 car.  In addition to that, the SpaceX headquarters in Los Angeles were used in the factory scenes with Ivan Vanko.