The CIA Once Tried Using Cats As Spies

August 3, 2011 Jon
Note: This is a guest article contributed by frequent TIFO visitor and owner of DumpADay, Jon. 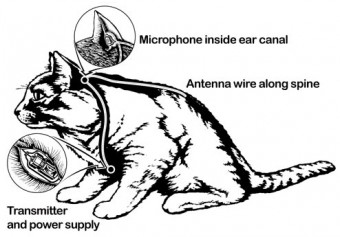 Today I found out that in the 1960s, the CIA spent 5 years and over $20 million training spy cats.

I guess it’s not as strange as it might first seem. Cats are stealthy, smart, fast, can jump tall objects, and most people when they see a cat will pet it, not assume it’s a spy. For these reasons the CIA put a 3/4 inch transmitter in a female grey and white cat.  They then hid a microphone in its ear canal and had the antenna run along its back all the way to the tip of its tail. However, since cats are relatively small in size, the batteries that were used were small and could only record short conversations. It took some time to get each component just right. Making sure the cat had full mobility and didn’t lick or scratch at the audio devices hidden inside it. The operation was the easy part; the hard part was training the cat to follow directions. As anyone who has ever owned a cat, or been around a cat for any length of time can tell you, getting a cat to do anything other than what it wants to do is nothing short of amazing.

After 5 years of training and $20 million, the CIA felt they could get their special cat agent to move in specific directions and go to specific locations on command (as long as it didn’t get distracted, bored or hungry, which, for a cat, is almost all the time). None-the-less, they decided to field test their $20 million, highly trained acoustic kitty agent. They drove a van across the street from a known Soviet meeting place in Washington, D.C. The targets were two men sitting on a bench in a nearby park. They opened the door and deployed their secret kitty agent. The agent took a few steps and was hit and killed by a passing taxi cab. Needless to say it was a catastrophe (pun intended). The “Acoustic Kitty” project was then scrapped and was called a complete failure. I think the words “catastrophic failure” would’ve been a more appropriate labeling of the project, but that’s just me.