The Interesting Origin of the Word “Handicap” 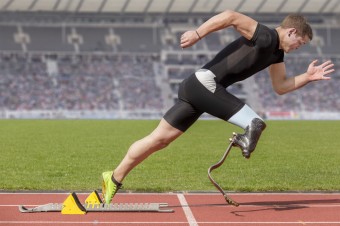 Today I found out the origin of the word “handicap.”

You might have heard that the word originated from disabled veterans in England during King Henry VII’s reign (15th-16th century). Unable to make a living for themselves after war, they were forced to take to the streets with their “cap in hand,” begging for coins. King Henry VII made it legal for disabled people to beg because he didn’t think they could hold down jobs. Disabled individuals, therefore, became known as “handicapped”…

It turns out, though, that this is not true—in fact, “handicapped” didn’t take on the “disabled” meaning until the early 20th century.

Long before the word meant “disability,” there was a game called “hand in cap.” It was a barter/betting game that involved two people exchanging items and one acting as something of an arbitrator.

While there are variations of the game, the gist of it is that one person would claim another person’s possession then offer something they thought was of equal value in exchange. The third would inspect the items, assign them value, and the one who presented the lesser-valued item also had to present additional coins to “equalize” the transaction.  Next, both traders and the arbitrator would put forfeit money into the hat.

The two traders would then put their hands into the hat.  If one or both of them thought the arbitrator’s valuation was fair, they’d pull out their hand(s) with palm open.  If one or both thought it was unfair, they’d pull out their hand(s) in a fist.  If both individuals are in agreement, either in accepting the trade or rejecting it, then the arbitrator gets to keep the forfeit money.  If the two are in disagreement, the one who agreed to the transaction gets the forfeit money and the arbitrator and other individual gets nothing.

The game was known to be around in 1653, though it was likely developed before then. Slowly but surely the name was shortened- from “hand in cap,” then “hand i’cap” and finally “handicap.”

The word soon gained a new meaning, too. Rather than referring to a single game, it started to refer to the act of equalizing other contests and games to make them fair. The first known instance of this was in 1754 during horse races; “handicap” still has this meaning in many different sports today. For instance, in a footrace, the person who was known to be faster than the others might have to start farther back than his competition. Golf, polo, bowling, and even pool games will sometimes assign handicaps to players, usually based on averages from previous games.

Handicaps were assigned to the stronger players, meaning they were being penalized, or weakened, to be more on par with their competition. By 1883, the word “handicap” started being used to mean “equalization” in many different areas other than sports.

Since “handicap” basically came to mean “put at a disadvantage,” it was only a short time before it started being applied to people with a disability who were “at a disadvantage” physically in comparison to those without a disability (though of course that’s relative; I wouldn’t be able to beat any of the Paralympics runners in a race! :-))

In 1915, the term “handicapped” was applied to disabled children. By 1958, the word was used to describe all disabled persons—adults and children with physical or mental disabilities.

In recent years, the term “handicapped” has been used less and less. It carries some negative connotations with it; in fact, it’s included in one list of the “top ten worst words” to call disabled people, right up there with better known negative words like “retard” and “cripple.”  (Interestingly, the term “retarded” was originally used to replace the terms “idiot,” “moron,” and “imbecile” due to the fact that these terms gradually became thought of as derogatory.  This obviously only worked for a while and now “retarded” is also considered a derogatory term.)

To underline this negative association of “handicap”, Damon Rose, editor of the BBC disability website, wrote:

‘Handicapped’ is a word which many disabled people consider to be the equivalent of ‘nigger’. It evokes thoughts of being held back, not in the race, not as good, weighed down by something so awful we ought not to speak of it.

That said, “handicapped” is not universally offensive; while many disabled people do take offense, many others don’t care if it’s used, and some even prefer it. (Of course, “disabled” is seen by some as a negative word, too, with some people preferring “less abled.”)

There has also been some attempt to “take back” the word “cripple” and use it in a positive sense, such as with the talented comedian, and sufferer of Congenital Muscular Dystrophy, Ally Bruener and her “I laughed at the crippled girl” comedy act; her definition of “crippled” being: “Something so awesome, it’s debilitating. Opposite of ‘lame’.”