The Girl Next Door: Playboy Magazine Through the Years 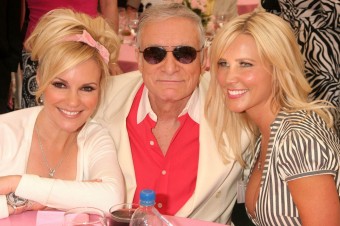 Since the dawn of the Internet age and the oft-lamented readily available pictures of naked ladies, today’s youth will never know the heart-stopping risk of hiding under the covers with a flashlight and your older brother’s well-worn copy of Playboy. The world was a much different place when Playboy magazine began – funded in part with a $1,000 loan from founder Hugh Hefner’s mother.

Hugh, a graduate of the University of Chicago, was working for Esquire magazine writing promo copy and had originally planned to call his magazine “Stag Party.” But a men’s outdoor magazine named “Stag” was already in existence, and its publisher had contacted Hefner to alert him he’d have to sue to protect his trademark if Hugh used the name. Other names were then bandied about, including “Top Hat,” “Sir,” and “Bachelor,” until “Playboy” was finally settled upon.

The first issue of Playboy magazine was produced in Hefner’s kitchen, and its cover didn’t even bear the date of its December 1953 release, as it was far from certain whether there would even be a follow-up issue. He certainly knew the audience he was hoping to attract, as he left a short, unsigned message on the first page stating,

We want to make it clear from the very start, we aren’t a ‘family magazine.’ If you’re somebody’s sister, wife or mother-in-law and picked us up by mistake, please pass us along to the man in your life and get back to your Ladies Home Companion.

Gee, thanks for the heads up, Hef.

The very first centerfold was Marilyn Monroe. The picture wasn’t an original photo taken exclusively for Playboy, but rather a picture taken for a calendar some time earlier. Nevertheless, the image of Marilyn nude on a red velvet background ensured that the debut issue of Playboy sold out rapidly. It’s still popular to this day, with a copy of this issue in near mint condition selling for a whopping $5,000 in 2002.

Since a second issue was now a done deal, details such as art work were being addressed, and the aptly named designer Art Paul came up with a rabbit shown in profile sporting a tuxedo bowtie. This was originally intended to be used as an endnote in the magazine, but it was decided it would better serve as the logo. It has been the iconic company logo ever since. Hefner explained his choice of the rabbit to represent his company in detail to the Italian reporter Oriana Fallaci:

The rabbit, the bunny, in America has a sexual meaning, and I chose it because it’s a fresh animal, shy, vivacious, jumping – sexy. First it smells you then it escapes, then it comes back, and you feel like caressing it, playing with it. A girl resembles a bunny. Joyful, joking. Consider the girl we made popular: the Playmate of the Month. She is never sophisticated, a girl you cannot really have. She is a young, healthy, simple girl – the girl next door . . . we are not interested in the mysterious, difficult woman, the femme fatale, who wears elegant underwear, with lace, and she is sad, and somehow mentally filthy. The Playboy girl has no lace, no underwear, she is naked, well-washed with soap and water, and she is happy.

One of the more enduring myths that circulated about Hef and the Playmates was due to the ambiguous markings on the cover of the magazine. During the years spanning from 1955 to 1979, the “P” in the word “Playboy” had stars located either in or around it. Legend has it that these stars were either a rating given by Hef to indicate that particular Playmate’s attractiveness, skill in the sack, or number of times Hef had bedded her. In reality, the stars, which numbered between zero and twelve, had the more prosaic function of indicating advertising regions. If the truth is stranger than fiction, it’s also sometimes more boring.

Of course, men often like to make the claim that they only read Playboy for the articles. Some of them may not have been lying. Too much. Over the years, some of the best writers in the world have been published between the pages of Playboy, and high caliber interviews with icons from both the world of entertainment and politics have given Playboy an air of credibility the cruder skin mags can never hope to achieve.

This tradition of literary greatness started very early on at Playboy. Ray Bradbury’s classic Fahrenheit 451 was serialized over three months in 1954. But things really got rolling in the mid-60s when Robie Macauley was the fiction editor at the magazine. During the ten year period from 1966 to 1976, authors such as Shel Silverstein (yes, the notable children’s poet got his start here), John Updike, Saul Bellow, Anne Sexton, Kurt Vonnegut, Doris Lessing, Michael Crichton, Jean Shepard and many others were published in the pages of Playboy.

Another major feature of the magazine for much of its existence has been the Playboy interview, an in-depth discussion featuring various notable personages. Some stand-out interview subjects have included Martin Luther King Jr., Jimmy Carter (remember the “I’ve committed adultery in my heart many times” controversy?) and John Lennon and Yoko Ono. When John Lennon was killed on December 8, 1980, the issue of Playboy containing David Sheff’s interview with John and Yoko was currently on the newsstands. The entire historic interview was released shortly after in book format.

Playboy reached the peak of its popularity in the 1970s, and found itself contending with competition from other magazines, such as Penthouse and Oui, in a genre it had entirely invented. The magazine has since made attempts to stay current by featuring artists and focusing on issues relevant to their age 18-35 target demographic, but it has never achieved anything close to its earlier dominance in the industry.

Despite this, business isn’t so bad as Playboy has long since ceased to be simply a magazine. It is a major brand encompassing everything from clothing to glassware to cologne.

Playboy is an American success story. It’s another tale of how, with a little capital, smarts and hard work, you can build an empire… in this case, an empire of naked ladies. America, what a place. 😉