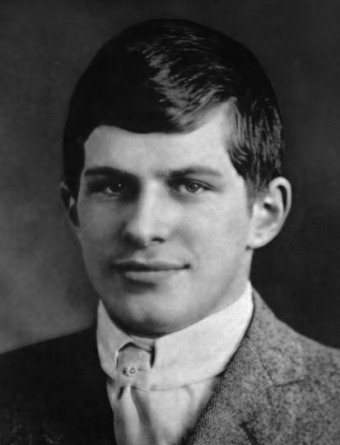 Before the terms “Tiger Mom” or “Helicopter Mom” entered our vernacular.  Before the moms on “Toddlers and Tiaras” tried to turn their daughters into beauty queens. Before Earl Woods showed off his two year old son Tiger’s golf skills on the Mike Douglas Show. Before Lindsay Lohan’s dad, the mother in Psycho, and every other overbearing parent we know from modern pop culture, there was William J. Sidis and his mom and dad.

Boris and Sarah Sidis were Ukrainian Jewish immigrants who were both brilliant. Having fled the Ukrainian due to political and religious persecution, they decided to settle in New York City. Boris was a psychologist who quickly became known (and somewhat infamous) for his work with hypnosis and his studying of mental disorders. Sarah was a doctor who was one of the only women of her time to earn a medical degree. Both had highly successful careers, but they wanted children. So, on April 1, 1898, Sarah gave birth to the couple’s first child, William James Sidis.

Combining Boris and Sarah’s genes alone should have been enough to produce a very smart child, but they didn’t want merely a smart child. They wanted a genius.

William’s education began in his very first days on Earth. Sarah quit her job practicing medicine to mold their son into the image they had in mind for him. They used the family’s life savings to buy books, supplies, and any other tool they needed to encourage their son. Utilizing Boris’s innovative psychology techniques, William was taught to recognize and pronounce letters from the alphabet within months. He was using words like “door” at six months. He became dexterous enough to feed himself with a spoon at eight months.

His parents were proud of their son, but possibly more proud that Boris’s techniques in teaching his son were working, constantly publishing academic papers showing off their successes. By two years old, William was reading the New York Times and tapping out letters on a typewriter from his high-chair – in both English and French. He wrote one such letter to Macy’s, inquiring about toys.

Unfortunately, his time to act like a child had already passed young William by. Studying seven different languages (French, German, Latin, Hebrew, Greek, Russian, and one he made up himself – Vendergood) and learning a high school curriculum at seven left Billy precious little time to act his age. His parents wanted the whole world to know about their prodigal son, as well as their participation in all of it.

He was accepted into Harvard at age nine, but the university refused to allow him to attend due to him being “emotionally immature.” His parents took this perceived slight to the media and William was front page news in the New York Times.  This gave William the notoriety and fame he was not prepared for. Tufts College, though, did admit him and he spent his time correcting mistakes in math books and attempting to find errors in Einstein’s theory of relativity.

His parents pressed Harvard further and when William turned eleven, they relented. William Sidis became a student at one of the most prestigious universities on Earth at the age most kids were perfectly content playing stick ball and not worrying about giving a dissertation on the fourth dimension.

On a freezing Boston January evening in 1910, hundreds gathered to hear the boy genius William Sidis in his first public speaking engagement, a talk about fourth dimensional bodies. His speech, and the fact that it was over most of the audiences’ heads, became national news.

Reporters followed William everywhere on campus. He rarely had a private moment. He graduated from Harvard at the age of 16, cum laude. Despite his success, Harvard was not a happy experience for young Billy.  According to Sidis biographer Amy Wallace, William once admitted to college students nearly double his age that he had never kissed a girl. He was teased and humiliated for his honesty. At his graduation, he told the gathered reporters that, “I want to live the perfect life. The only way to live the perfect life is to live it in seclusion. I have always hated crowds.”

After leaving Harvard, society and his parents expected great things from William. He briefly studied and taught mathematics at what later would become known as Rice University in Houston, Texas. His fame and the fact that he was younger than every student he taught made it difficult on him. He resigned and moved back to Boston.

He attempted to get a law degree at Harvard, but he soon withdrew from the program. William, brilliant as he was, struggled with his own self-identity. In May 1919, he was arrested for being a ringleader of an anti-draft, communistic-leaning demonstration. He was put in jail and that’s where he would meet the only woman he would love – an Irish socialist named Martha Foley. Their relationship was rather complicated, mostly due to William’s own declaration of love, art, and sex as agents of an “imperfect life.”

When in court, he announced that he didn’t believe in God, that he admired a socialist form of government, and many of the world’s troubles could be traced back to capitalism.  He was sentenced to eighteen months in prison.

Fortunately for him, his parents’ influence kept him out prison, but William decided he’d had enough of “crowds” and wanted his “perfect life.” He moved city to city, job to job, always changing his name to keep from being discovered. During this time, it’s believed he wrote dozens of books under pseudonyms (none of which were particularly well read), including a twelve hundred  page work on America’s history and a book entitled “Notes on the Collection of Streetcar Transfers,” an extremely in-depth look at his hobby of collecting streetcar transfers. It was described by one biographer as the “most boring book ever written.”  In another of his books, he divulges a theory on what later would become known as “the black hole theory.”

Seclusion fit William just fine. He wanted nothing more than him and his genius to be left alone.

In 1924, no longer talking to his parents and out of contact with anyone who truly cared for him, the press caught up to William. A series of articles were printed describing the mundane jobs and the measly living conditions the supposed-genius William Sidis had. Ashamed and distressed, he withdrew further into the shadows. But the public remained infatuated with the former boy wonder’s apparently wasted talents.  In 1937, The New Yorker printed an article titled “April Fool!” which described William’s fall from grace in humiliating detail.

The story resulted from a female reporter who had been sent to befriend William. In it, it described William as “childlike” and recounted a story about how he wept at work when given too much to do. Sidis sued the New Yorker for libel and the case went all the way to the Supreme Court, before they eventually settled seven years later. But the damage had been done. William Sidis, for all the potential he showed as a child prodigy, would never become the man he was supposed to be.

On a summer day in July 1944, William’s landlady found him unconscious in his small Boston apartment. He had had a massive stroke, his amazing brain dying on the inside. He never regained consciousness and was pronounced dead at the age of 46 with a picture of the now-married Martha Foley in his wallet.