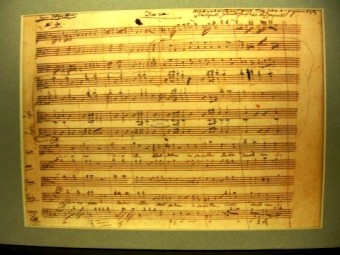 Myth: Listening to Mozart will make you smarter.

This myth was popularized by an experiment published in Nature in 1993 by the University of California at Irvine. In this study, they had 36 students listen to 10 minutes of Mozart before taking a spatial IQ test. Their claim was that this increased the spatial IQ score of the students by an average of about 8 points, due to increasing performance in specific types of spatial-temporal tasks.

Specifically, in their study, Rauscher, Shaw, and Ky, gave participants one of three standard tests concerning abstract spatial reasoning. The subjects were exposed to three listening conditions: silence, non-Mozart relaxing music, and a sonata by Mozart. Using the Stanford-Binet IQ test, they claimed that listening to Mozart boosted the subjects spatial IQ’s temporarily by 8-9 points over the other two listening conditions.

There are a few problems with how this got spun by the media. First, the researchers claim was only that it seemed to increase subject’s abilities in certain spatial-temporal tasks. They never said anything about increasing ability anywhere else or in a person’s general IQ, as their study was only on the effects of Mozart on spatial-temporal reasoning. The media of course proceeded to blow these results out of proportion and say that this study showed that listening to Mozart makes you smarter in general, not just concerning spatial tasks.

Yet another problem with the media and company’s like Baby Genius’s portrayal of this is that the results only showed an increase in IQ for about 15 minutes. There is no research to date that shows listening to Mozart, or any other music, can boost IQ permanently.

Now to the problems with the actual study itself and their results. First, they used a very small sample-size in this study. That should instantly be the first warning flag that one should wait for further research on this issue before jumping to conclusions or taking the results as fact. When you are dealing with small sample-sizes, filtering out the noise from what is actually happening is impossible in most cases.

With that in mind, it turns out, other researchers have had very little success in replicating the original results. Several research projects have run the exact same study, using the exact same methods and implementation of the experiment and found zero evidence of any “Mozart Effect”. However, a few others have found some evidence of a “Mozart Effect”. So what’s going on here?

One team of researchers in 1999, made up of Chistopher F. Chabris, Kenneth M. Steele et. al., concluded, concerning the mythical Mozart Effect, that “any cognitive enhancement is small and does not reflect any change in IQ or reasoning ability in general, but instead derives entirely from performance on one specific type of cognitive task and has a simple neuropsychological explanation, called ‘enjoyment arousal’.”

“Enjoyment arousal” simply means that if you are enjoying yourself, to some extent, you will perform better at certain tasks you are given. On that note, another study showed that listening to Mozart only boosted performance in spatial-temporal tasks in those subjects who enjoy listening to Mozart, which would explain the seemingly random results various research projects have come up with concerning this issue. To further demonstrate that the cause was “enjoyment arousal” and not Mozart, the researchers read passages from Stephen King novels to the subjects while they performed their tasks. The subjects who enjoyed Stephen King novels showed a boost in their ability to perform the tasks they were given at the same boost level as the “Mozart Effect” subjects. Those who did not enjoy Stephen King novels showed no boost, similar to those who did not enjoy Mozart music.

Further research by William Forde Thompson, Gabriela Husain, and Glenn Schellenberg, in 2001, also backed up this claim. In their study, they had subjects rate their moods and energy levels while doing the specific spatial tasks. When listening to upbeat Mozart pieces, many of the subjects reported their mood and energy levels increased. Those students who reported that increase also scored better during this time. They were also then tested with a more depressing piece of music playing. Not surprisingly, student’s moods and energy levels went down and so did their results. Once the results were calibrated with mood and energy levels, it was found that it was the mood and energy levels, not the music, that was spurring the increased results. Thus, it would seem that the results are entirely based on whether the subject enjoys Mozart or whatever it is they are listening to while being tested, whether music, or simply someone reading a Steven King novel to them.

So in the end, money spent on products like much of the Baby Genius line, or the like, by states and parents would be much better spent on music lessons for kids; there is a vast amount of research that conclusively shows music lessons, particular for kids (the younger the better), improves their ability to concentrate; helps their self-confidence; helps their coordination; and seems to boost their intelligence as well, among other positive developmental benefits to the brain. Further, the boost is significantly higher than even the most optimistic of the “Mozart Effect” claims. And best of all, these effects seem to last for years, some of them for the entire life of the individual and the improvements aren’t subtle. Indeed, one experiment showed that even just eight months worth of regular piano lessons on preschoolers will increase their spatial reasoning IQ on average about 50%. That’s not even including all the other benefits; that’s just talking about the spatial reasoning boost.

Of course, the reason people probably want the Mozart Effect to be true, over learning a musical instrument, is that listening to Mozart is passive; it takes no work and is generally enjoyable to listen to while doing other things (hence the boost). Learning an instrument and to play music is hard and takes an amazing amount of work. But in the end, if you want to maximize yours or your children’s brain-related potential, this particular brand of work has been proven to pay off in spades.