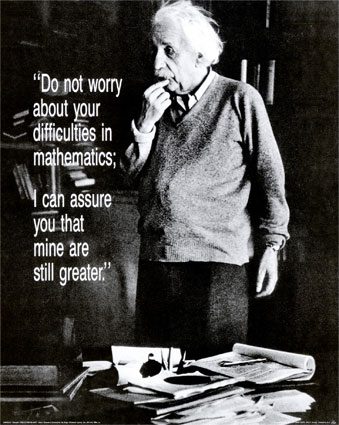 Today I found out Albert Einstein did not fail at mathematics in school.

In fact, he actually excelled at mathematics throughout his schooling and even considered becoming a mathematician for a time.  This rumor actually started while he was still alive and even showed up in a particular issue of Ripley’s Believe It Or Not. Einstein was shown the article in Ripley’s, which had the title “Greatest living mathematician failed in mathematics.” Beyond the fact that this failure never happened, the other incorrect bit in that article was that Einstein was not a mathematician. Einstein reportedly found the article humorous and remarked: ““I never failed in mathematics… Before I was fifteen I had mastered differential and integral calculus.” (15 was the age in Germany that most qualified students would start to learn calculus.)

Indeed, by the age of 12, Einstein took it upon himself to see if he could learn geometry and algebra on his own. His parents subsequently bought him textbooks towards this end and, in one summer, he mastered both subjects, while coming up with his own proofs to prove the various mathematical theories he was studying, including his own way to prove the Pythagorean Theorem. Also at the age of 12, he began learning calculus, which, as noted, was about three years ahead of his classmates that would eventually qualify to pursue calculus.

How the myth came about that Einstein was poor at mathematics at an early age isn’t entirely known. A few theories have been thrown about. One story, who knows if it is true, is that in 1896 (the last year he attended this particular school), the school he was attending reversed their grading scale so that “6” became the highest mark, instead of the lowest, and “1” became the lowest, instead of the highest. So it would have looked like he had suddenly gone from passing to failing in his final year, when comparing with his marks from previous years.

Another potential origin story is that it was simply a case of him frequently needing to solicit the aid of mathematicians to double check is work, as well as to help him formalize his theoretical ideas into the language of mathematics. This, however, had nothing to do with being poor at mathematics; he simply wasn’t a mathematician and was often dealing with very advanced topics in mathematics that only mathematicians were generally proficient at. Even in these cases though, he typically picked up what he needed to know very quickly from the mathematicians who helped him.