This Day in History: December 16th 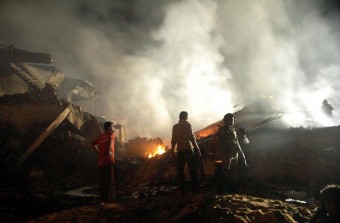 Park Slope Air Disaster in Brooklyn, NY (1960) was the first of its kind – two airliners trying to make their way through a soupy mess of snow, sleet and fog only to violently collide over New York City, falling to the ground below in a huge fiery explosion of flaming wreckage.

The accident was a first in other ways as well, all somber. It was the first U.S. plane crash involving a commercial jet carrying passengers onboard. It was also the first time that investigators could determine the cause of the crash by using flight data recorders, better known as black boxes, that planes had just started to carry.

The two planes involved were a United DC-8 flight from Chicago en route to Idlewild Airport (now John F. Kennedy International Airport) in the southern section of Queens. A TWA Super Constellation coming from Dayton was on its way to LaGuardia in North Queens at the same time.

Because of the inclement weather, the United flight went into a holding pattern. When the United pilot miscalculated the location of the correct pattern, the aircraft ended up directly in the path of the TWA flight. 138 people died, including 128 passengers and crew members and 10 people on the ground, including the caretaker of a nearby church and a man selling Christmas trees.

“It looked like a picture out of a fairy book. Then all of a sudden there was an explosion. The plane started to fall and people started to scream. I held on to my seat and then the plane crashed.” These are the words of 11-year-old Stephen Baltz, the only person to temporarily survive the crash. He died of his injuries the next day.

The TWA plane fell on a military airfield on Staten Island. The United flight, which had been traveling at 360 mph at the time of the crash, fell to the earth in the Park Slope neighborhood of Brooklyn. Badly charred parts of the plane, cargo and bodies hit the ground with a sickening thump, as a river of jet fuel sparked a fire that eventually engulfed eleven buildings and required seven alarms. Firefighting efforts continued for three days to contend with the multiple fires that continued to break out.

As so often is the case after horrible disasters, the only positive result was better safety measures put in place for the future. The Park Slope crash ultimately led to safer aircraft, and more extensive training for pilots.