This Day in History: October 31st 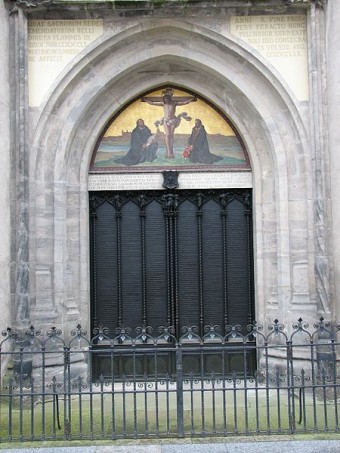 On the last day of October in 1517, a scholar and priest named Martin Luther did as priests commonly did at the time when they had something to discuss amongst the clergy, he nailed a piece of paper to the door of the Castle Church in Wittenburg, Germany.  Unlike many other such documents nailed to the doors of churches, this one sparked a religious and social revolution that would change the landscape of Europe and the world forever.

Like many other Roman Catholics of the day, Martin Luther was troubled by abuses going on within the Church, and the decadent lifestyles of many professing to abide by the rules of poverty, chastity and obedience.  He had previously led discussions on these topics, but little came of his verbal debates.

The last straw for Luther occurred when John Tetzel, Pope Leo’s top salesman, was ordered by the Pope to sell indulgences to pay for the restoration of St. Peter’s Basilica in Rome. In other words, the faithful were told that if they coughed up enough dough, they could buy themselves a spot in heaven, something most decidedly against scriptural teachings.

This action inspired Luther to go a step further than verbal discussions and to write his 95 theses, which not surprisingly included scathing criticism on the practice of selling indulgences, such as:

“Those who believe that they can be certain of their salvation because
they have indulgence letters will be eternally damned, together with their
teachers…”

“Christians are to be taught that if the pope knew the exactions of the
indulgence preachers, he would rather that the basilica of St. Peter were
burned to ashes than built up with the skin, flesh, and bones of his sheep.”

“To consider papal indulgences so great that they could absolve a man even
if he had done the impossible and had violated the mother of God is madness.”

“To say that the cross emblazoned with the papal coat of arms, and set up
by the indulgence preachers is equal in worth to the cross of Christ is
blasphemy.”

“Again, ‘Why does not the pope, whose wealth is today greater than the
wealth of the richest Crassus, build this one basilica of St. Peter with his
own money rather than with the money of poor believers?'”

Though Luther has come down through the centuries as a poking-the-bear sort of rabble-rouser, there is enough evidence to believe that he did not intend for his work to be debated widely by the general public. For starters, Luther composed his document in Latin, the language of scholars. Latin was largely unknown to illiterate common folk, and gibberish to most of members of the aristocracy and royalty as well. He pinned it to a church door, which was commonly done by scholars hoping to share their work with other learned men to allow for future discussion.

But, at some point, someone took the document down from the church door and translated Luther’s theses into German. In modern terms, he posted some thoughts on a semi-private forum and his post went viral.

Many copies were made and distributed among the people of Wittenburg and the surrounding areas. When Luther found out what had happened, he tried to get back his original copy, but the genie was already out of the bottle.

Most people were illiterate in 1517, so a person who could read would stand center-stage in a well-traveled public place, such as a market square, if he thought he had something of general interest to pass along.

This is how word of Luther’s 95 theses and his outrage over the local people being ripped off from indulgences spread through the area. The people of Wittenburg were strapped for cash as it was, and didn’t take kindly to the idea that a comfy seat in heaven didn’t have a “reserved” sign with their name on it thanks to their indulgences.

Luther’s work spread through Germany like wild fire, and news of his theses and its popularity with the common folk finally reached Rome. Pope Leo X gave the German cleric several opportunities to recant and repent. Luther said he’d pass, and in 1521 he was officially excommunicated from the Catholic Church.

The Holy Roman Emperor Charles V was also out to get him, and issued the Edict of Worms (which is a fascinating read if you care to follow the link and read the full text) which, among other things, named Luther as an outlaw and a heretic.  Among the gems in it:

“We are rooted in that faith with a true heart, like our predecessors and progenitors, who by the grace of God also persecuted the enemies of our faith and banished them from their lands.”

“To put an end to the numberless and endless errors of the said Martin, let us say that it seems that this man, Martin, is not a man but a demon in the appearance of a man, clothed in religious habit to be better able to deceive mankind, and wanting to gather the heresies of several heretics who have already been condemned, excommunicated, and buried in hell for a long time.”

“Upon the advice of our council, several other princes and prelates from our lands and domains and other good people of our company are also in attendance. We have finally arrived at the following conclusion. By the authority vested in us…  the sentence is to be executed against Martin Luther and his false doctrine (already condemned by our Holy Father the pope, the true and legitimate judge in these matters)… We have declared and hereby forever declare by this edict that the said Martin Luther is to be considered an estranged member, rotten and cut off from the body of our Holy Mother Church. He is an obstinate, schismatic heretic, and we want him to be considered as such by all of you.

For this reason we forbid anyone from this time forward to dare, either by words or by deeds, to receive, defend, sustain, or favor the said Martin Luther. On the contrary, we want him to be apprehended and punished as a notorious heretic, as he deserves, to be brought personally before us, or to be securely guarded until those who have captured him inform us, whereupon we will order the appropriate manner of proceeding against the said Luther. Those who will help in his capture will be rewarded generously for their good work…”

“Furthermore, we declare in this ordinance that if anyone, whatever his social status may be, dares directly or indirectly to oppose this decree–whether concerning Luther’s matter, his defamatory books or their printings, or whatever has been ordered by us–these transgressors in so doing will be guilty of the crime of lèse majesté and will incur our grave indignation as well as each of the punishments mentioned above…”

Luther, fortunately, had the protection of a German prince named Frederick, and under his care began writing a German translation of the Bible, which took him ten years to complete. He died in 1546 of natural causes.

Luther’s actions were but one spoke in the wheel of a Reformation sweeping all over Europe simultaneously. Even the most devout Catholics realized change was desperately needed to eradicate rampant corruption and hypocrisy within the Church. For better or worse, the rise of nationalism went hand-in-hand with the rise of Protestantism. The days of a Europe more or less unified under one church were over.