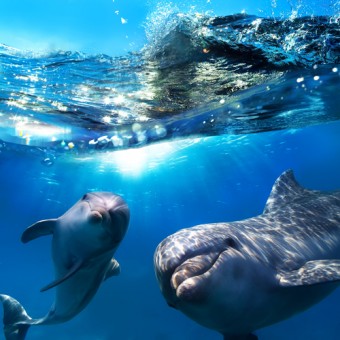 1. Dolphins belong to the order of Cataceans (marine mammals) and are closely related to whales and porpoises. They are the only group of mammals that generally give birth to their young tail first, instead of head first like other mammals

2.  “Dolphin” comes from the ancient Greek “delphis”, which means more or less “fish with a womb”.

3. Dolphins don’t breathe automatically, rather it is always consciously done. An interesting consequence of the fact that they need to be conscious to control their breathing is that they can never be truly unconscious, even when they sleep.  However, being mammals, their brains do need to enter a type of unconscious state every now and again in order to continue to function properly.  How dolphins handle this is to put one half of their brain to sleep, while the other half is still conscious and functioning.  They then alternate which side is sleeping periodically.  They stay in this state for approximately eight hours a day.  Doing this allows them to be conscious enough to control their breathing and periodically swim to the surface and get air, while still giving their brain the rest it needs.

4. Dolphins stay in well defined groups called pods. There are some species, like the highly intelligent bottle-nose dolphin, that form intricate and complex relationships within their pods to protect their own and sometimes even their territories. According to a study conducted by a University of Massachusetts, Dartmouth team that studied over 120 dolphins in the Shark Bay area off the western coast of Australia, they discovered that the dolphins led very intense social lives within their pods, with relation to other pods. Their pods are mostly centered around the reproductive females, with the male dolphins closely guarding them. When interacting with other pods, the dolphins can be conniving and sometimes try to play rival groups by engaging in “extensive bisexuality, combined with periods of exclusive homosexuality”, according to Discovery News.

They form a number of different types of alliances that play special roles. One such order of alliances is to consort with the enemy to distract them enough to snag the females of that group for mating. Another order is to recruit other males to defect and join their side, again, to steal more females from other pods or to help defend their pod’s females. Lastly, a group is charged with acting as liaisons to get allies in order form dolphin “armies”, if needed.  It is because of these tight-knit formations and social structures that bottle-nose dolphins have often been called the “gangsters of the sea” or “ocean mobsters”.

5. Dolphins are known to be highly intelligent creatures with large brains that allow complex cognition. They are capable of mirror self-recognition, communication, mimicry, and cultural transmission, among other things, with many considering them to be second only to humans in terms of overall intelligence.

7.  The ancient Romans once used dolphins to help them fish.  The dolphins were trained to drive fish towards fishermen.  Once a large enough group of fish was near the fisherman, the dolphins would signal the fishermen to cast their nets.  Fisherman in Santa Catarina, Brazil, still train dolphins to do this.

8. Dolphins have a very keen sense of detecting objects using echolocation. Because of this amazing ability, the U.S. Navy has been employing and training dolphins (since the 1960s) to help them detect underwater mines. In recent times, they have played an important role in clearing the Strait of Hormuz,  in the Persian Gulf (a very important passage through which one-fifth of the world’s oil shipments pass).  The trained dolphins are sent off to find mines and alert the Navy of them by dropping off a floating marker or acoustic transponder to mark the spot. In the 2003 invasion of Iraq, these mine-detecting dolphins helped the U.S. to disarm over 100 anti-ship mines and traps set by the Iraqi forces in the Umm Qasr port. As you might expect, animal rights activists aren’t too happy about this usage of the dolphins. However, the Navy says the dolphins don’t get close enough to detonate any mines. It’s unknown if there have been any dolphin casualties from accidentally setting off mines.

9. Male dolphins have a retractable penis that swivels. As a side effect of this dexterity, dolphins sometimes use their penis like humans use their hands, to feel out or explore objects.

10. Female dolphins are fiercely motherly. Photographer Leandro Stanzani once had the very rare opportunity to witness and capture the birth of a dolphin, where as soon as the baby dolphin as born, the mother assisted it gently to the surface to breathe for the first time.  Like all mammals, dolphins nurse their offspring with milk from the mother and will typically care for their little ones for 2-3 years.

11. “Killer Whales”, or Orcas, are actually dolphins.  In fact, they are the largest member of the dolphin family, Delphinidae. Now strictly speaking, whales are marine animals of the order of Cetacea and occasionally Cetacea is used to refer to not just whales, but also porpoises and dolphins.  However, it generally excludes these latter marine animals, which belong to the sub-order Odontoceti.  So, depending on who you talk to, dolphins, including the Orca, may be considered whales and dolphins or may be considered a separate marine animal from other whales.  But in either case, Orcas are one of the 35 species in the oceanic dolphin family, with its closest relative being the Irrawaddy dolphin.

12. Amazon river dolphins swim upside down.  It is thought that the humps on their backs help them feel around on the bottom of the river to locate food.  This also may help them see what is below them better as below their eyes they have puffy cheeks that obstruct their vision.