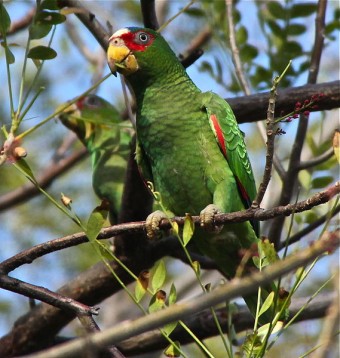 White-fronted Parrots, also known as “White-fronted Amazons” or “Spectacled Amazon Parrots”, begin their mating season around February and it lasts through June or July. (Although, this varies based on region. In some regions, their breeding season doesn’t even start until November.)

After selecting a suitable partner, the two parrots will begin “kissing” one another, locking their beaks and playing with each other’s tongues, making these birds one of the few animals to engage in kissing. As the kissing session drags on, the male will eventually vomit into the female’s mouth.

While female giraffes urinate in the male’s mouth before mating in order for the male to determine if the female is an appropriate mating partner, the male parrot vomiting in the female’s mouth isn’t thought to serve any such purpose.  Rather, it is thought that the male is simply giving the female a gift, by regurgitating food into her mouth.  Yummy!

After mating, the female will typically lay about 3-4 eggs which incubate for about 26 days before hatching.