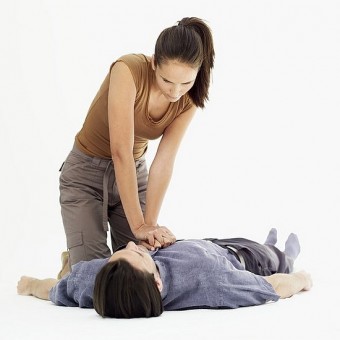 Myth: Proper CPR technique should include frequent use of “mouth to mouth” in between compressions.

In fact, the 2010 guidelines set out by the American Heart Association (AHA) do not recommend breathing for someone while performing CPR (and not for your health, as you might think, but for the person experiencing cardiac arrest’s chances of survival). If you’re a person who was trained in CPR a long time ago, you might be familiar with the once staple “15 chest compressions then 2 breaths”. If you followed the 2005 guidelines, then you’re familiar with the “30 compressions then 2 breaths” technique. In both cases, you should throw those out the window.

In 2010, ILCOR (International Liaison Committee on Resuscitation), reviewed hundreds of studies and found that breathing just wasn’t necessary for people when doing CPR. Even for advanced medical personnel, like paramedics and doctors, breathing for someone in cardiac arrest has a limited role. The science behind this seemingly huge shift in treating someone has been around for over a decade, but it has only been recently that people in the U.S. have been paying attention (many European countries changed their recommended method well before the United States).

The purpose of the heart is to move blood around the body and supply our organs and tissues with needed nutrients. We can replace hearts, lungs, livers, kidneys, etc., but in the end, they all are really just working together to keep our brains alive.

The pumping action of the heart creates an internal pressure throughout your vascular system (arteries and veins). This is measured in millimeters of mercury, and is what gets elevated with excessive intake of cheese and beer (mmmm cheese and beer). When we perform chest compressions, we artificially create this pumping by squeezing the heart. The blood is forced out of the heart and into the bloodstream. When we let up on the compression, the closed vascular system siphons blood back into the heart, ready to be pushed out again.

There is a minimum blood pressure that one needs to supply the brain with blood. Numerous studies have shown that it takes about 10 chest compressions in a row to create enough “pressure” to get blood to the brain. The minute you stop chest compressions, like when you are giving someone breaths, the blood pressure goes immediately back to 0. As a result of this, what these studies showed was that the way people performed CPR in the past was only getting blood to the brain 1/3 of the time during compressions. Since the purpose of performing CPR is to allow a person’s brain the opportunity to function again, and getting blood to that brain is the only way to do it, increasing compressions became the treatment of choice.

Brain cells begin to die approximately 4-6 minutes after blood stops flowing. Every minute after that, a person’s chance of regaining function within those cells goes down by about 10%. Thus, around 10-16 minutes after having ones heart stop, a person will be brain dead. While it is medically possible to get their hearts beating again, there is no benefit to that person at that point. Their brain is dead anyway. If you did, however, get their heart beating, you now have a wonderful garden from which doctors can harvest organs, assuming you’re a donor (and you should be, you won’t be needing those organs anyways when you die or are otherwise brain dead and there are many others who do).

So now you might be wondering, if oxygen is still needed, why aren’t they recommending the “breathing” step now-a-days? At the moment someone goes into cardiac arrest, the brain is still trying to function, but with a less than adequate oxygen capacity. The breathing centers of the brain, specifically the medulla oblongata and the pons region, continue to send signals to the diaphragm in an attempt to keep respiration going. The end result is a breathing rate known as agonal respiration. While this type of breathing is not sufficient to maintain appropriate oxygen levels in someone’s blood for long, it still allows for some exchange of oxygen and carbon dioxide within the lungs.

At the moment of cardiac arrest, there is also an adequate amount of oxygen in the blood to maintain metabolism within the brain for a few minutes. A person’s metabolism will naturally use up this available oxygen over time, but combined with agonal respiration, the result is that there can be enough oxygen within the bloodstream that breathing for someone isn’t necessary while you wait for emergency aid. Unfortunately, the exact amount of time where breathing isn’t necessary isn’t precisely known, varying from study to study.  However, ILCOR looked at studies that used different ventilation to compression ratios, from 15 compressions to 2 breaths, all the way up to 100 compressions to 1 breath, and even no breathing and only compressions, and while every study had differing numbers of survival, the trend was always the same. The least amount of interruption in compressions, even for breathing, the better chance the person had of surviving.

When paramedics or doctors show up, you might think they have countless advanced tools and medicines that will get a person’s heart and brain going again. In actuality, CPR and compressions are the main focus during their attempts at successfully resuscitating someone. Breathing has now become almost an afterthought, something that’s only done after you have enough people to perform chest compressions and put a defibrillator to use. Once that is the case, breathing is then addressed. When breathing is addressed, at no point will chest compressions ever be stopped for the sake of breathing.

Even giving lots of oxygen to people whose hearts do begin working again is starting to show itself to be a dangerous practice. Medical professionals used to give excessive amounts of oxygen to a patient in cardiac arrest as it was the prevailing thought that the more oxygen you could give someone in cardiac arrest, the greater chance oxygen would reach the brain and keep the cells alive (seems reasonable enough). However, current studies are showing that people are having better survival rates (by survival I mean get discharged from the hospital with some sort of brain function) when they get large doses of oxygen withheld from them and simple “room air” is used instead.

So to summarize, because there is usually an adequate amount of oxygen in the blood, for a while, compressions and compressions only is the main focus of good CPR today. While one would think the more oxygen and breathing you can do for someone who isn’t doing it on their own, the better. Studies are now showing that just isn’t the case. So don’t worry about having to French-kiss that 300 pound guy with tobacco on his lips and blood in his mouth. It’s better for him, and you, if you don’t! No more can Squints go to the pool and fake that he’s drowned just to get Wendy Peffercorn to give him mouth to mouth. ‘Cause it’s not gonna happen if she’s properly trained.

*Legal Disclaimer: While I am a paramedic; I teach classes on CPR; and am obviously well versed in emergency medicine and techniques, unfortunately I need a legal disclaimer here, so here it is:  This article contains general information about medical conditions and treatments. The information is not advice, and should not be treated as such. You should never delay seeking medical advice, disregard medical advice, or discontinue medical treatment because of information in this article…. There, I’ve covered myself.