The Color Pink Doesn’t Exist? So Why Can We See It? 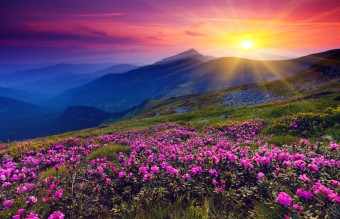 Absent from the visible spectrum and neither a wave nor a particle, the color pink is, for many, a scientific enigma: how can a shade that doesn’t even appear in the rainbow exist? The answer lies in color theory.

Unlike art production (see below), when it comes to eyesight (and video production), the primary colors are red, green and blue.

At the back of your eyeball, sitting on the thin, light-sensitive retina, are millions of rods and cones. The rods (all 120 million) are all the same and each is sensitive, and only responds, to light or its absence. On the other hand, the cones (only 6-7 million) come in three types: red-, green- and blue- sensitive.

Light is both particle and wave, and like other waves, moves at certain frequencies. The visible light we see zips in at about 400 million, million times per second depending on the color. Violet (at one end of the visible spectrum), is the fastest, while red (at the other end) takes its sweet time. The other colors in the spectrum, moving at their particular frequencies, are indigo, blue, green, yellow and orange. The color pink, not a part of this spectrum, does not have a particular frequency.

When light gets to the back of your eye, it hits the rods and the cones. In low light, a tyranny of the majority occurs, and the far more numerous rods take control of your eyesight. As the rods only detect the presence or absence of light, in this situation, your view looks a lot like night-vision goggles.

However, in brighter light, the cones kick into gear and the world becomes more colorful. The three primary colors (RGB) are each typically detected by their respective cones, although green perception may also involve the blue and red cones (which helps explain color-blindness). When it comes to the other colors, though, it is a bit more complicated.

Consider yellow. It exists as a wavelength, but your eye lacks yellow-sensitive cones. In that absence, yellow activates your red and green cones, and, firing together, they send a message to your brain. There, your noggin translates the red and green transmissions into yellow. Likewise, blue cones work with green cones to produce cyan and with red cones to produce magenta.

Furthermore, there are colors that require all three types of cones. White occurs when all cones fire completely, while black is perceived when no cones are activated. Grey happens when all three cone types react, but only partially.

Pink (light pink, not magenta) falls into this last category. To be perceived, it needs red cones to fully react, and both green and blue cones to only partially activate.

Notice, however, how many of these colors, including cyan, brown and magenta as well as pink, do not exist on the visible spectrum, yet we perceive them as distinct. It is for this reason that some have opined that color perception is “not actually a property of light or of objects that reflect light [but rather] is a sensation that arises within the brain.”

Unlike eyesight and video production, art and print production’s primary colors are cyan, magenta and yellow. Why? The difference lies in the fact that the former mixes light, while the latter mixes pigments.

The hues created when the eye (or screen) mixes red, green and blue inputs are called additive colors. In this process, light waves can be “optically mixed by being placed closely together, or by being presented in very rapid succession.”  In order to work, additive colors require emitted light from a source like the sun or a television. With manmade additive colors, different combinations of red, green and blue light are fired at a screen. One example might be the vivid red super suits in the movie The Incredibles.

However, not all color we see is the result of addition. Remember that most objects reflect only some light waves and absorb the rest; the colors produced by this reflected light (where part of the visible spectrum has been withheld) are called subtractive colors. For example, the bright hue of a Red Delicious apple, which has absorbed the blue, orange, yellow, green, indigo and violet, is a subtractive color.

Eerily interrelated, CMY are the secondary colors of RGB, and vice versa.

What about Red, Yellow and Blue?

The primary colors of your childhood remain alive and well in grammar school classrooms, but do not provide as great a range of color as CMY(K).

Each color model’s range is limited to its gamut. RGB has the largest gamut of the three and RYB, the smallest. RGB, however, which requires emitted light in order to create its full gamut of colors, is unavailable for print or art production (you try to combine green and red to produce yellow). So, most professionals and vendors have adopted the next largest gamut available, CMY(K) (the “K,” by the way, stands for black).

Lately, pink has come under fire thanks to Henry Reich and his fun and informative Minute Physics. (Seriously, go subscribe to his channel; it’s awesome. And while you’re at it subscribe to our YouTube channel here. You won’t be sorry in either case.) In a 2011 video on YouTube, Reich “proves” that magenta (what he calls pink) cannot exist, either because it could only exist in space already occupied by radio and gamma rays, among other things, or because magenta is really only the absence of green.

In defense of the color, Scientific American’s Michael Moyer delved into optical science and noted that, given the complicated process of photons and neurons interacting with our cones and brains, all colors could be considered a trick of the mind. He finished with: “Pink is real – or it is not – but it is just as real or not-real as red, orange, yellow, green, blue, indigo and violet.”