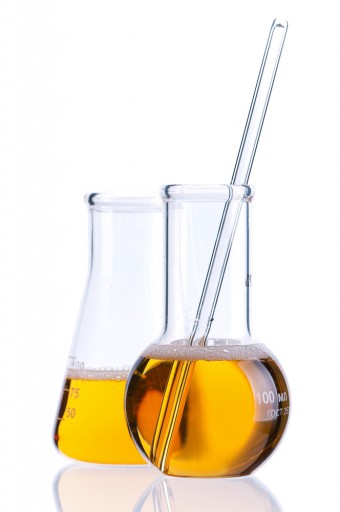 If you’ve ever taken a daily multivitamin you too might have noticed your urine turning a bright yellow-ish color. Take your vitamins and eat some asparagus and you might just think you’re dying the next time you pee!

What’s happening is that urine will turn a bright, sometimes neon, yellow in response to excess riboflavin.

Riboflavin, also known as vitamin B2, is a common ingredient in almost all multi-vitamins. It was first discovered in 1872, when chemist Alexander Wynter Blyth noticed a pigment in milk that was yellow-green.

In 1879, it was reported as lactochrome and lactoflavin. It wasn’t until the 1930s that the substance giving off a yellow pigment was characterized as riboflavin. (The “flavin” portion coming from the Latin word “flavus”, meaning “yellow” or “blonde”.)

So why does riboflavin give off a yellowish color? Like almost anything that has color, it all comes down to light absorption.

Light, in general, is merely electromagnetic radiation. This radiation comes to us in a waveform and is classified by its wavelength. Shorter wavelengths come to us in the form of x-rays and ultraviolet light. Longer wavelengths come to us in the form of things like microwaves and radio waves. The light we can see is actually only a very narrow band of wavelength between 400-700 nanometers in length. The color is classified by the length. For example, 400-500nm will appear blue, and 600-700nm will appear red.

The colors we see are a result of the wavelengths not absorbed by the material. So if a material absorbs light in the 400-500nm range (blue) then the color we will perceive is in the 500-700nm range (greens, yellows and reds).

Riboflavin, specifically, absorbs light strongly in the 260-370nm range. While this falls outside of the light we can see with our eyes, it’s also Riboflavin’s ability to absorb light at 450nm (the blues) that give it its distinctive yellowish color.

So why does it turn pee yellow? The answer is simply how the body gets rid of excess.

Several studies have shown that approximately 50% of all excess riboflavin gets excreted in the urine. Those same studies show that the maximum amount that can be absorbed in a single dose was about 27mg, with half of that being absorbed in the first 1.1 hours. Given that the recommended adult daily intake of riboflavin is between 1-1.6mg per day and some common doses of riboflavin in multivitamins (that I could find) are 25, 50, and 100 mg, it’s easy to see that excess amounts can be easily attained.

The result is a nice color to your urine that, if you’re a hypochondriac, may make you think you’re dying. As a doctor friend of mine remarked when I was discussing this with him and excessive amounts of unneeded vitamins Americans buy every year, “Americans have the most expensive urine in the world. It’s like flushing money down the drain.” 😉