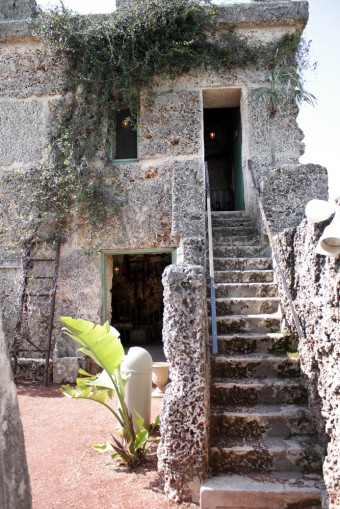 Between 1923 and 1951, a diminutive Floridian single-handedly and without heavy machinery moved 1,000 tons of limestone, creating out of it a castle. This is his story.

Very little is known of the mysterious creator of the Coral Castle, Ed Leedskalnin. Born in Riga, Latvia in 1887 to a family of stonemasons, Ed immigrated to the U.S. sometime around 1913 after his fiancée broke off their engagement (and a large piece of his heart). During a bout with tuberculosis around 1919, he moved to Florida, where magnets were apparently used to treat his condition. This experience seems to have had a life-changing effect, as you’ll see later.

After he bought a parcel of land in Florida City, Florida, Ed began to work on the Castle. A loner, one hundred pound, five-feet tall Ed refused to let anyone even watch him work, and no one is known to have helped him move, carve or place the massive stones. When asked how he manipulated such large blocks alone, Ed would explain that he had “discovered the secrets of the pyramids.” 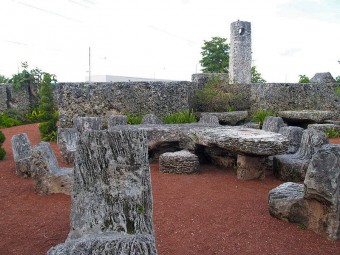 Originally named Rock Gate Park, the Coral Castle was first erected at Ed’s remote Florida City home. Fearing the loss of privacy as development moved closer, Ed transported his castle, with the aid of a truck, tractor and trailer, 10 miles north to its present location in Homestead, Florida.

Not really coral, the huge stones that comprise the castle are composed of oolitic limestone; the coral designation came about later when visitors noticed fossilized coral and shells in some of the rocks.

The average weight of the stones is about 14 tons each. With these huge rocks, Ed built walls, erected a tower and a 22-ton obelisk. He made a variety of “furniture” including beds and rocking chairs, as well as a fountain, table, well, sundial and throne.

Apparently fascinated with astronomy, Ed carved a stone telescope, and even erected large stone depictions of Jupiter, Saturn and the moon from blocks weighing as much as 23 tons. For the most part, each carving and piece is made from a single stone. The tallest stones reach 25 feet, while the heaviest rock weighs nearly 30 tons.

Using no joint compound or mortar, the massive stones, when combined together, are held in place by their own weight.

They are so well constructed (and heavy) that during the Category 5 Hurricane Andrew in 1992, none of the stones shifted and the 8 ft. wall was not effected and remains to this day of uniform height around the wall.

Perhaps the most spectacular structure on the grounds is the eight-foot tall revolving gate. Carved to exacting specifications, it clears the walls next to it by a mere quarter of an inch. Before it needed repair in 1986, it was widely reported that the swivel was so well designed that the gate could be opened with just the push of one finger.

When it broke in 1986, the nine-ton gate required six men and a crane to remove and re-install what Ed put up alone.  What they discovered when they did the repair was that he’d used a metal shaft placed in a hole drilled through the stone, positioned to balance the gate perfectly.  The shaft itself sat on a truck bearing.  What had caused the gate to break was simply that the bearing became rusted.  They replaced the bearing and shaft, and again had to fix it in 2005, but today it is no longer quite so easy to open and close as it once was. 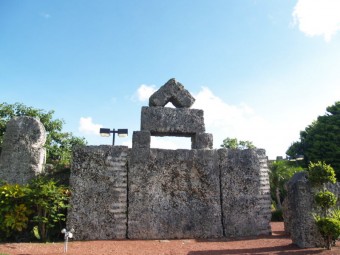 Ed believed that the animating force in the universe does not come from the protons and electrons in the atom, but rather from tiny magnets of different and opposite polarity that imbue all matter. In his book, Magnetic Current, Ed explained his basic principle:

[Because] the magnet can be shifted and concentrated . . . you can see that the metal is not the real magnet. The real magnet is the substance that is circulating in the metal. Each particle in the substance is an individual magnet by itself, and [contains] both North and South Pole individual magnets. They are so small they can pass through anything. In fact they can pass through metal easier than through the air. They are in constant motion . . . running one kind of magnets {sic} against the other kind, and if guided in the right channels they possess perpetual power.

It is this “perpetual power” that Ed claims to have harnessed in order to move, carve and place his humongous stones. The power itself came from a machine he dubbed the Perpetual Motion Holder (PMH). He built it on his idea that electricity is made up of two magnetic forces that move opposite each other in a double helix motion. Ed’s machine was composed of two coiled wires, each having its own terminal and current, and connected to each other nose to tail in a circuit. This completed circuit allowed individual magnets to form into one of two currents, and the currents to “chase” each other in a never ending loop.

Ed claimed that by directing this “perpetual electromagnetic energy”, he could easily manipulate the large stones. According to unverified reports, the massive rocks would then be floated into place like “hydrogen balloons.” Deriding the theories of conventional archaeologists, Ed is quoted as saying he had “found out how the Egyptians and the ancient builders of Peru, Yucatan, and Asia, with only primitive tools, raised and set in place blocks of stone weighing many tons.”

Several people have claimed to have successfully constructed a PMH, including Russell Martin, Nornd, Chris Sykes and Matthey Emery.  But as you might imagine, hard, documented, well-vetted evidence of a full size machine that can float stones around as he said is hard to come by, which is unfortunate because such a technology would finally presumably give us a viable flying car. 😉

In reality, one person with the right expertise could have achieved this without any such machine.  And, indeed, Leedskalnin had tripods of various sizes, pulleys, winches, etc- things he presumably would not have needed if he was simply floating stones around.

But whether he truly did use some such amazing machine of his own creation, or just the much more likely common construction implements and know-how, the scope of the “castle”, as well as the craftsmanship involved in building it, is extremely impressive.