The Mystery of Gobekli Tepe

About eleven thousand years ago, in a remote corner of the cradle of civilization, Stone Age people who lacked cities, agriculture and metal tools built an enormous complex of multi-ton stone pillars called Gobekli Tepe (Potbelly Hill) in a region in modern day Turkey. The high degree of artistic skill and organizational wherewithal discovered at the site has caused the field of archaeology to question one of its most basic theories.

Situated at the northwest edge of Mesopotamia in Southeastern Turkey, Gobekli Tepe is a tell; that is, an ancient manmade hill built from the accumulated layers of millennia of building atop the ruins of those who came before. At the lowest level, its most significant construction dates back to 10,000-11,000 BC, a period that predates the introduction of writing, metal tools and the wheel in the region by 6,000 years.

Armed with only the simplest technology, the ancient builders used stone tools to chip enormous blocks of limestone into pillars, each weighing between 11 and 22 tons. Then hundreds of people would work together to move the pillars anywhere from 100-500 meters to the complex.

At the site, the large stones were arranged in circular rings of approximately eight upright pillars, each. Every pillar is comprised of two stones that form a T shape. Typically, six pillars, connected with low walls, are set around the circumference, and two taller pillars are situated in the center. The tallest pillars reach16 feet in height, and the largest rings are 65 feet in diameter. To date, nearly 200 pillars have been found at the dig. 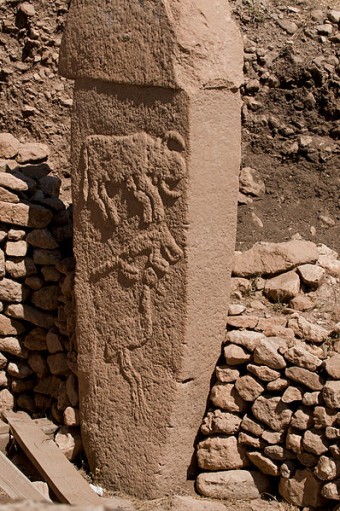 A menagerie of animals, including bulls, foxes, snakes, vultures, spiders, insects, donkeys, gazelles and lions, have been carved in relief into the stones. There are also bizarre depictions of humanoid forms hewn into the stones as well. Experts have noted that, unlike other Stone Age art, which typically depicted herd animals, at Gobekli Tepe, the images are of a “scary, fantastic world of nasty-looking beasts.”

Although archaeologists had been aware that there were old limestone slabs on the innocuous hill since the 1960s, the remnants had been dismissed as the broken gravestones of a medieval cemetery, and the site was essentially ignored for decades. Then in 1994, German archaeologist Klaus Schmidt took a second look and realized that the unusually rounded shape of old Potbelly was something that “only man could have created.” Thinking it had to be a Stone Age site, Schmidt got to work.

In addition to traditional excavation, which has unveiled a treasure trove of flint tools and uncovered four of the rings, geomagnetic surveys were conducted in 2003 that revealed 16 additional rings buried in the hill. These remain undisturbed due to the relative locations of the rings and their method of burial: it appears that every now and then, the builders would fill in a ring, pillars and all, with dirt, gravel, flint, old tools and animal bones. Then they would erect a new circle on or near the old, buried one. The result is “20 rings piled together, higgledy-piggledy, under the earth.”

Although no one knows why the complex was built, Dr. Schmidt believes it was a religious temple, and perhaps even a burial site. Many experts agree. One has noted that, in particular, the prominent depictions of vultures indicates that the site may have served as the religious home of a death cult; in ancient times in the region, it was widely believed that the carrion-eaters transported the flesh of the dead up to heaven.

Others, like Whitman College’s Gary Rollefson, think that the vast distance in time and lack of any writing makes deciphering the builders’ motivations a vain task: “There’s more time between Gobekli Tepe and the Sumerian clay tablets [etched in 3300 BC] than from Sumer to today. Trying to pick out symbolism from prehistoric context is an exercise in futility.”

Of the many discoveries made at the site, perhaps the most intriguing is that the builders likely did not live in settlements, but rather were hunters and gatherers. This is remarkable because, heretofore, most experts espoused the Neolithic Revolution; this theory held that in order to build monumental structures, a society needed to have the organization and resources that only comes about through agriculture and settlement. The evidence found at Gobekli Tepe, however, appears to be strong enough to overcome what had, until quite recently, been conventional archaeological wisdom.

First, unlike its arid landscape today, 11,000 years ago, the Sanliurfa region was a “paradise” that teemed with game, fruit, nut trees and wild grains, all readily available to collect without the need for farming. Second, archaeologists, who have been digging at the site for nearly 20 years, have yet to find any evidence of the hearths, cooking, houses and garbage dumps found in the typical Neolithic settlement. Third, rather, they found 100,000 bits of the bones of wild game animals like boar, gazelle, sheep and deer, as well as a variety of bird species; as one expert said: “It was pretty clear we were dealing with a hunter-gatherer site.”

Building on this evidence, the new theory turns the Neolithic revolution on its head: rather than monument building as a consequence of agriculture and settlement, it became the impetus for it. Proponents theorize that the enormous number of people required to build the complex, and who chose to remain near after it was completed, required more food than could reliably be collected with hunting and gathering. As one expert opined, “I think they began cultivating wild grasses on the hills” in order to feed the masses. Recent findings from other disciplines seem to back this theory up.

In the same way anthropologists have used DNA and other evidence to trace our common heritage to a lady who lived in Africa approximately 140,000 years ago, geneticists have traced the migration of plants as well. In particular, the earliest strains of domesticated wheat have been traced back to an ancient village that was only 20 miles from Potbelly Hill. In addition, the first pigs were domesticated in a village only 60 miles away, and the region also saw the first domestic sheep, goats and cattle. Other research has revealed that the practice of agriculture began in the region about 10,500 years ago, only a few centuries after construction at Gobekli Tepe began.

In the final analysis, proponents of the new theory conclude the interesting notion that, based on the evidence at hand at the Gobekli Tepe dig,  “religion motivated people to take up farming.”

If you liked this article, and the timeline below, you might also enjoy:

A Brief History of Building Big

Across the world and across time, man has enjoyed building large monuments. To give you an idea of just how old Gobekli Tepe is, consider the following timeline: