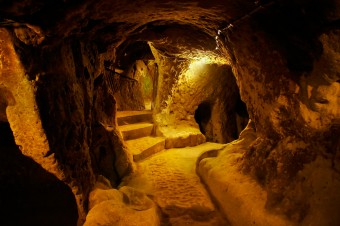 Long ago, in the region surrounding Nevsehir and Kayseri, in central Turkey, an ancient people built, or rather dug, over 200 underground cities. The deepest of these, under the present day town of Derinkuyu, delves over 250 feet below the Earth’s surface, and boasts numerous tunnels, halls, meeting rooms, wells and passages.

Because the city was carved from existing caves and underground structures that had first formed naturally, there is no way to discern, with traditional archaeological methods of dating, when exactly Derinkuyu was built. As such, and with ties to the Hittites, Phrygians and Persians, Derinkuyu presents a fascinating riddle for ancient mystery enthusiasts.

Derinkuyu is located in the Cappadocia region of Turkey, a place renowned for its unique geology. At the dawn of time, volcanoes in the area covered it with a thick layer of ash. Over the years, this ash transformed into a soft rock that itself eroded over the eons, leaving an exotic landscape of pocked spires, columns and rough pyramids, referred to by the locals as castles. Perhaps inspired by their surroundings, ancient people began to carve the soft ash rock into tunnels and rooms to be used as residences, storage, stables and religious temples.

Cappadocia boasts a number of fascinating carved sites including the churches and refectories at Goreme, the Roman-made castle at Uchisar and the largest underground city in the region, Kaymakli. The latter has been inhabited continuously since its construction, and people today still use it for storage and even stables.

The underground city at Derinkuyu has 18 stories that descend far into the Earth. Sophisticated shafts, some as long as 180 feet, provide ventilation to the complex’s multitude of residences, communal rooms, tunnels, wine cellars, oil presses, stables and chapels.

The city also has numerous wells to provide fresh water.  So many, that most scholars agree that Derinkuyu could have easily supported as many as 20,000 people.

It is widely presumed that the city was part of a larger complex; in support of this, many point to a commonly-believed rumor that a tunnel extends from Derinkuyu to its sister underground city, Kaymakli, some three miles away. Conventional wisdom holds that these cities were built for the same reasons other people built citadels and castles – to protect the populace during invasion. Some of the strongest evidence to support this theory includes the self-contained fresh water supply, as well as the enormous stone, circular doors, weighing up to 1,000 pounds, that could seal off passageways from invaders.

Derinkuyu had been lost to time until, during renovations on a modern home, an opening to a cave passage was revealed. Although visitors have been allowed in the underground city since 1965, many passages and rooms still remain inaccessible.

There is no consensus on who built Derinkuyu or when construction first began.

Some suggest that the earliest construction started with the Hittites in the 15th century BC. The Anatolian Hittites, distinct from the group described in the Christian Bible, controlled a large portion of Asia Minor extending from the Black Sea to the Levant. Cappadocia, and Derinkuyu, were smack in the middle of their territory.

Throughout their history, the Hittites faced a variety of enemies including the Egyptians, the Assyrians and the Thracians (a group of loosely affiliated tribes from southeastern Europe). In the 12th century BC, the Thracians destroyed the Hittites’ main city of Hattusa, and many believe the Hitties used Derinkuyu as a shelter during that onslaught. They support this theory with a small number of Hittite-related artifacts, including a statute of a lion, found on the site.

Others are not convinced of a Hittite origin and point instead to the Phrygians. One of the Thracian tribes that sacked Hattusa around 1180 BC, the Phrygians controlled the region until approximately the 6th century BC when they were conquered by the Persian host under Cyrus the Great.

Archaeologists consider Phrygian’s architects among the finest of the Iron Age, and they were known to have engaged in large, complex construction projects. One of their most well known works was the sophisticated great citadel at Gordion, built between 950 and 800 BC. Because they are known to have possessed the necessary architectural skills, and inhabited the region for such a long time, many credit the Phrygians with creating Derinkuyu; these experts place the first construction on the complex to sometime between the 10th and 7th centuries BC.

The second chapter of the Vendidad, a section of the Zoroastrian book Avesta, includes the story of how the great and mythical Persian king Yima created places underground to house “flocks, herds and men.” Relying on this, some opine that Derinkuyu was built by ancient Persians; since the Avesta dates to the founding of Zoroastrianism (1500-1200 BC), Persian construction on the site would have to have pre-dated any construction done by the Hittites. Although intriguing, because the Vendidad makes no clear link with Derinkuyu, this theory has little mainstream support.

Regardless of who built it, later generations have inhabited it. Many believe early Christians used the underground cities of Cappadocia, including Derinkuyu, as a place to hide from Roman persecution. In support of this claim, they point to the fact that Saint Gregory and Saint Basil had both presided in Cappadocia during the 4th century AD.

Underground Cities in the Modern Era

Surprisingly, the ancient people of Anatolia weren’t alone in their love of underground living. Like the Hittites and Christians hiding from their enemies, the people of Moose Jaw, Saskatchewan built a network of tunnels and residences to hide the town’s Chinese immigrants from persecution in the early 20th century. Later, smugglers reportedly used the underground city during Prohibition to hide their illicit wares from law enforcement.

In France, the last inhabitants of the Village troglodytique de Barry, an underground community that dated back to the 6th century AD, were forced to abandon their homes just a few years ago when their houses began to fall down around them. According to reports, a few people died before the last inhabitants were convinced to leave.