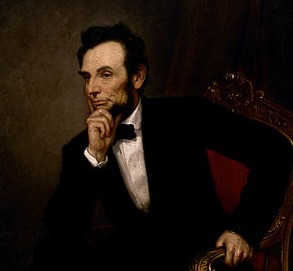 Perhaps the most popular and beloved U.S. President, Abraham Lincoln is famous for many of his great and historic deeds. As these have been frequently documented, there seems no reason to repeat them here. But few know and realize President Lincoln’s great love for animals.

Like many young boys, Lincoln would sometimes do cruel things to animals, but Lincoln quickly outgrew this childish phase and shed any desire to hurt or inflict pain on any animal. When his schoolmates tortured turtles by turning them on their backs (a common practice at the time), young Lincoln scolded them for it and told them “it was wrong.”

Lincoln would preach sermons to his family against cruelty to animals, “contending that an ant’s life was, to it, as sweet as ours”.

According to all who knew or met him, Lincoln was a deeply sensitive man. Once, when Lincoln was making a trip with several companions, they came upon a small bird that had been blown out of its nest by a recent wind storm.  His companions laughed at him and chided him for delaying them as Lincoln searched the area for the young bird’s home.

Upon locating it, Lincoln carefully placed the fledgling bird back in its nest.  “I could not have slept tonight”, he told them, “if I had left that helpless little creature to perish on the ground”. (note: handling baby birds does not cause the parent birds to reject them)

In another instance, Lincoln trekked back half a mile to rescue a pig he’d seen caught in a mire. “Not because he loved the pig”, recalled a friend, but “just to take a pain out of his own mind.”

Lincoln refused to ever hunt animals, which was extremely contrary to frontier mores and “manliness” of the time. “I care not for a man’s religion”, Lincoln once stated, “whose cat or dog is not the better for it… I am in favor of animal rights as well as human rights. That is the way of a whole human being.”

He was crazy about cats. Recalled one friend, “He would take one and turn it on its back and talk to it for an hour at a time.”  Because of this love of cats, Secretary of State William Seward presented President Lincoln with two kittens as a gift early in his administration in August of 1861.

“Jip”, the White House dog, would often have lunch with President Lincoln.  “Jip was always in Mr. Lincoln’s lap to claim his portion first”, said a White House servant.  “He was caressed and petted through the whole meal.”  The dog helped relieve Lincoln of “some portion of his burden” during the Civil War (even before the war, Lincoln was, by all accounts, a severely depressed and often-morose man.)

In February of 1863, the White House stable caught fire. President Lincoln tried to run into the burning building himself, but was stopped by men on the scene.  When he learned that six horses had burned to death in the fire, Lincoln reportedly openly wept.

Lincoln had two pet goats he loved, “Nanny” and “Nanko”.  He liked to give them free reign to wander (and chew furniture) around the White House, much to the consternation of his staff.  He took great pride in the goats’ affection for him.