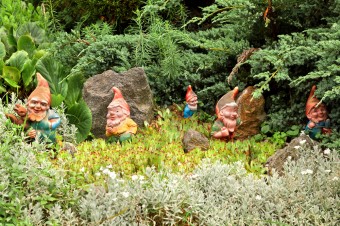 Garden gnomes are those statues you see of pint sized chubby human-like creatures usually wearing red hats and blue pants. You can find them in a variety of poses and pursuing various past times such as fishing, napping, or in the case of my personal gnome, smoking a pipe. Garden gnomes are typically male and have beards but you see the occasional female gnome statue these days.

While it took longer to catch on in the United States, garden statuary has been popular in European countries since at least the Renaissance. Saints, gods and mythical creatures were among the early figures depicted, and one character called Gobbi, which is Italian for “dwarf” or “hunchback”, starting in the early 1600s.

From there, references of “House Dwarves” are found in the late 1700s. These statues were made of porcelain and produced continuously through the 19th Century.  It is believed the dwarves morphed into gnomes and moved from the house to the garden when Baehr and Maresch out of Dresden, Germany started producing their own take on the dwarves around 1841.

Sir Charles Isham was also a key figure in the spreading of the gnome, when he introduced gnomes to the United Kingdom by bringing 21 of the terracotta figures home with him from a trip to Germany around 1847 and placed them in the garden of his home. (Amazingly, one of those original gnomes is still around.  Lampy, as the statue is called, is on display at Isham’s home, Lamport Hall.)

Within a couple decades of Sir Isham’s trip, garden gnomes began being strongly associated with Gräfenroda, Germany, a region famous for its ceramics. The two biggest players in the industry there were August Heissner and Philip Griebel (with the Griebel company still producing the gnomes to this day).

Griebel originally specialized in decorative terracotta animals but branched out to produce gnomes based on existing local myths about the creatures. These legendary magic using gnomes were said to be earth elementals (hence their placement in gardens) who lived underground in the daylight where they guarded their treasures, and would emerge at night. If they were caught out in daylight, they’d turn to stone, which of course lends itself to the idea of the garden gnome statues.

Thanks largely to Heissner and Griebel’s designs, the garden gnome’s popularity quickly spread across Germany and Europe and then the world.

Besides just sticking the Gnomes in a garden, another modern Gnome “tradition” has recently popped up- Gnome-napping.  Essentially, you steal someone’s garden gnome, then take it on a trip or other sort of adventure while taking lots of pictures of what the gnome’s been up to on its journey and send them back to the owner.  If you choose, when you’re done, you return the gnome to where it started.  This practice seems to have started in the 1980s in Australia, but saw a huge upswing in popularity thanks to the 5 time Academy Award nominated 2001 film Amelie where this is depicted.