This Day in History: October 18th 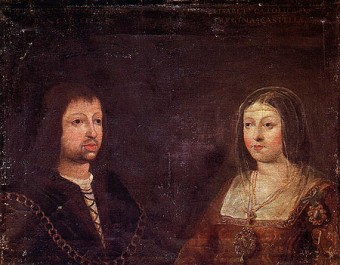 Ferdinand and Isabella were one of the most famous power couples in European history. In their eyes, their crowning achievement wasn’t expanding their empire to include the New World, or uniting the various dominions that would become modern Spain- they believed their greatest accomplishment was driving out all Muslims from their country.

When Ferdinand, the son of King John I of Aragon, married Isabella, the daughter of King John II of Castile, on the morning of October 18, 1469, many areas of the Iberian peninsula had been ruled by Muslims for over 700 years. Spurred on by their religious beliefs to unite their land under exclusively Christian leadership, Ferdinand and Isabella waged a costly and bloody battle that lasted a decade to rid their lands of the Moors. In January of 1492, they finally achieved their goal, and conquered the last Muslim stronghold.

It was during the reign of these monarchs that the dreaded Inquisition became the common method of testing the orthodoxy of Jews or Muslims that had converted to Christianity rather than be banished from Spain. It was to have a profound effect on the country of Spain and its people for many centuries to come.

Queen Isabella had a keen interest in expanding Spain’s commercial realm wherever possible, even overseas. When Ferdinand and Isabella agreed to sponsor a sea captain named Christopher Columbus on an expedition across the Atlantic, it wasn’t the first time Isabella had been involved with such an expedition. Spain had claimed the three largest Canary Islands 15 years earlier with the Queen’s backing.

The Spanish age of discovery was in full swing when Columbus came back to Spain in 1493. Columbus had explored several Caribbean islands during his journey. Between 1500 and 1502, the Crown authorized 12 new expeditions to the area, which included Columbus’ fourth and final voyage.

Back home in Spain, to shore up their defenses against France, their primary enemy, Ferdinand and Isabella signed treaties with England, the Holy Roman Emperor Maximilian I and the Hapsburgs. They married two of their four children into the Hapsburg family, who ruled much of Europe, a wise dynastic move that would play a part in Spain’s great rise in the coming decades. Their daughter, Catherine of Aragon, would become the first of the six wives of the future King Henry VIII.

Isabella and Ferdinand ruled much of the land that is now modern day Spain for thirty years. Their marriage united the kingdoms of Aragon and Castile, and expanded their holdings to continents that until recently were completely unknown. Although they did not accomplish the complete unification of Spain, by time they died, their country was well on its way to becoming the most powerful in Europe.