This Day in History: October 21st 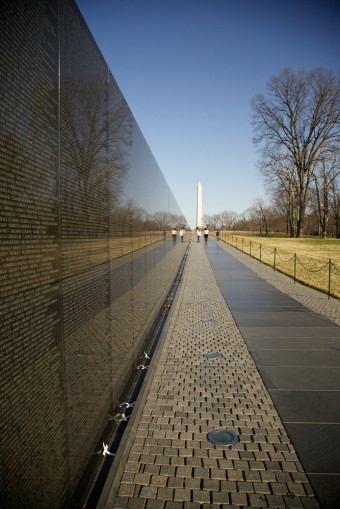 On this day in history, 1967, nearly 100,000 people – hippies, professors, women’s groups, radicals, war veterans, liberals, and people from most every walk of life – gathered in Washington D.C. to protest the war effort in Vietnam. This protest was a dramatic indication that support for President Johnson’s war in Vietnam was rapidly fading. Polls taken in the summer of 1967 showed that, for the first time, support for the war from the American people had fallen below 50 percent.

The rally began peacefully in front of the Lincoln Memorial, even though Dr. Benjamin Spock, the famed baby book author and outspoken critic of the war, did refer to President Johnson as “the enemy.” When the rally was over, about half of the demonstrators, some waving the flag of the Viet Cong, marched on to Pentagon. When the more radical demonstrators came up against the soldiers and U.S. Marshals protecting the Pentagon, pockets of violence erupted.

The protestors surrounded the military complex until the wee hours of October 23. When all was said and done, 683 people, including famed Pulitzer Prize winner, Norman Mailer, and two UPI reporters, had been placed under arrest. Parallel protests were also going on in major international cities in Japan and Europe. The one outside the U.S. embassy in London attracted 3,000 protestors who attempted to storm the building.

When the White House announced it was asking for a 10 percent increase in taxes to fund the war effort, the public’s support dwindled even further. The peaceniks began pushing harder for an end to the war, and the March on Washington was a tangible sign of the movement’s commitment to their cause.

The Johnson Administration countered by launching an aggressive propaganda campaign to restore America’s confidence in how the war was being handled. The president even called the Commander of U.S. Forces in Vietnam, General William Westmoreland, back to the United States so he could give a special address to Congress and the American people. These extraordinary efforts seemed to do the trick – for a little while.

The Tet Offensive in early 1968 left any credibility that Johnson Administration may have still had concerning the Vietnam War battered and broken beyond repair. Finally, on August 15, 1973, after the Case-Church Amendment was passed by Congress, the U.S. officially ended their military involvement in the war.

Two years later, the Vietnam People’s Army captured Saigon, officially marking the end of a war which cost over a million Vietnamese people their lives, along with a few hundred thousand Cambodians and Laotians, and nearly 60,000 U.S. citizens, as well as costing American taxpayers about $111 billion during the war. This is around $687 billion today. Along with subsequent benefits as a result of the war and interest on that money, the cost has been well over a trillion dollars after adjusting for inflation.