This Day in History: October 17th 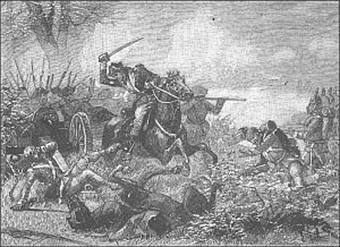 The Battle of Saratoga, which was actually two battles that took place during September and October of 1777, was a major victory for the American Revolutionaries and a crucial turning point of the Revolutionary War. It was the push the French were looking for to enter the war against the British, which reinvigorated the exhausted Continental Army and provided desperately needed support and provisions.

It all began as a plan by the British to put an end to the Revolution by taking control of Upstate New York while cutting New England off from the Southern colonies. Instead, it presented the Patriots with an opportunity they had been waiting and hoping for.

British General John Burgoyne planned to lead his troops south from Montreal to Albany, along Lake Champlain, Lake George and the Hudson River. They would join forces with two other units once in Albany, one group coming north from New York City, and the other arriving from the Mohawk River Valley to the east.

Burgoyne’s push south was deterred by Colonists felling trees to block the enemy’s path which slowed the progress of the British considerably. When Burgoyne’s troop finally reached Fort Edward’s, they were running dangerous low on provisions. A detachment was sent to Vermont to procure supplies, but they were overtaken by colonists which further lowered the number of Burgoyne’s troops.

Meanwhile, General Howe’s troops traveling north from New York City decided to make a side trip and take Philadelphia. General Washington retreated to New York which prevented Howe from leaving Philadelphia and hooking up with Burgoyne. He also could see a major battle brewing and quickly sent troops north, while putting the word out that any militia available to join the troops should do so. Soon there was a huge group of regular troops and militia gathering together in and around Saratoga.

Burgoyne made another attempt at advancing south, but only made it about ten miles out of Saratoga. The Battle of Freeman’s Farm, known as the first Battle of Saratoga, occurred on September 19, 1777. Colonists aggressively charged into battle with the British, while Virginian sharp shooters took aim at the enemy. Burgoyne lost two men for every one American lost.

The Battle of Bemis Heights, which was the second battle, took place on October 7, 1777. By this point, an enraged Burgoyne was determined to escape the encroaching colonial forces and drive those traitorous rebels from the field. Instead, the British troops, along with their German allies, were crushed, devastated and humiliated.

The decisive defeat at Bemis Heights left Burgoyne little choice but to withdraw north to camps around what is now Schuylerville, N.Y. On October 17, 1777, Burgoyne surrendered, returned to England in disgrace and was never given another command. These vital victories for the colonists at Saratoga finally persuaded the French to provide the Americans with military aid, which was one of the single biggest turning points in the America Revolution.