Why America was Named America 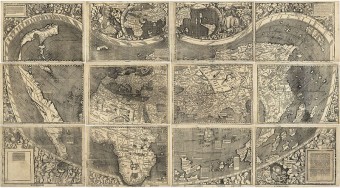 Today I found out how the Americas got their name.

Like most, I’ve known that the Americas were named after Amerigo Vespucci since my early education. However, the story behind why this is the case is somewhat more interesting and quite a bit less well known. Vespucci was a navigator that traveled to “the new world” in 1499 and 1502. Being a well educated man, he realized that this new world was not part of Asia, as some had initially thought. Vespucci chose to write about his travels and his books were published in 1502 and 1504. Being both entertaining and educational, his accounts of the new world were reprinted in almost every European language.

In 1507, a German cartographer, Martin Waldseemüller, chose to make a new map that included the new world. He and two scholarly partners were aware of Vespucci’s writings and were ignorant of Columbus’s expeditions. As such, they mistakenly thought Vespucci was the first to discover this new land and so named it after him, stating:

When the large new map, approximately 8 feet by 4 feet, was unveiled by Waldseemüller, it had the large title “AMERICA” across what is now present day Brazil. Waldseemüller used Vespucci’s travelogues as a reference for his drawing and so his map had South America as the only part of this new western hemisphere. When North America was later added, the mapmakers of the time retained the original name. In 1538, The famous geographer Gerard Mercator chose to name the entire north and south parts of America as one large “America” for the entire western hemisphere.

Christopher Columbus might well have had the new world named after him, had it not been for two shortcomings. The first was that Columbus was under the mistaken impression that he had found a new route to Asia and was not aware that America was an entirely new continent. The second was that he never wrote publicly about it so the masses were not aware of his discovery. Had he done this, Mr. Waldseemüller and his colleagues might have named it Columba! As it happened, Vespucci did write about it and was the first to call this land the “Novus Mundus” (Latin for “New World”).

tagged with Amerigo Vespucci, origin of american name, Waldseemuller map, why america is called america, why america named after Vespucci