Wombat Poop is Cubic and Other Fascinating Wombat Facts 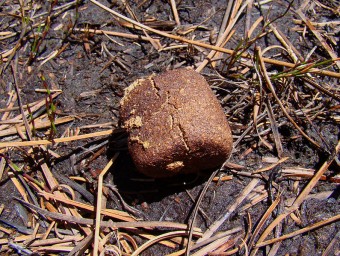 The common wombat (AKA, Vombatus ursinus) is an Australian marsupial with a unique claim to fame. You see, the common wombat and its two cousins, the Northern hairy-nose wombat and the Southern hairy-nose wombat, all poop pellets more or less in the shape of cubes, producing over 100 cubic pellets per day. If your day hasn’t been made by the phrase, “wombats poop cubes”, try saying it out loud a few times.

Though many sites and books make reference to the wombat’s distinctively angular leavings because of the fact that it’s weird as hell, very little information exists on how exactly this little marsupial actually manages it. Which is odd since, well, it isn’t supposed to be cubic; that’s not how biology usually works.  There’s generally some round tube, and a round opening that the smelly goo is squeezed through.  So how do they get cubes?

The secret is in the moisture. The wombat is noted to have the driest poop of any mammal, which is due in part to the wombat having an incredibly long digestive process that can take between 14-18 days. This process allows the wombat to absorb the maximum amount of nutrients from its food before it turns it into a smelly Lego block.

Wombats also have a very long colon and digestive tract.  As all the moisture is absorbed from its number twos, they become compacted and very solid. Thus, the wombat’s sphincter is mostly unable to shape the poop in any discernible way when the animal decides it needs to pinch one off, leading to the poop usually breaking off very cleanly, giving it flat sides, and thus taking on the shape of a very smelly cube-like object.

The fact that wombats make cubic trouser apples isn’t the only interesting thing about them. Despite its small, fuzzy appearance, the wombat is a veritable powerhouse and in a straight up sprint it could best Usain Bolt. Though it varies from wombat to wombat, it’s commonly accepted that the humble wombat can typically run at top speeds of 25 MPH (40 km/h) for a distance of around 164 yards (150 metres). Usain Bolt, on the other hand, runs at an average speed of just 23 MPH over 100 metres.  Essentially, if Usain Bolt challenged a wombat to a footrace, the wombat would beat him to the finish line then keep sprinting so it could head-butt his car and then steal his girlfriend.

But the wombat isn’t just fast, it’s also has one of the animal world’s toughest booties.  The wombat’s backside is so tough, that to defend itself from predators, it often leaps into a nearby burrow and blocks the entrance with its butt, which no animal in Australia can really hurt- and Australia is that country where seemingly every animal is designed to kill everything, constantly.

Its backside isn’t just for blocking up holes either. If trapped in a burrow, the wombat can easily use its powerful back legs to straight up crush the skull of just about any predator by using a wombat version of a Muhammed Ali move. This tactic involves the wombat slipping under the gaping maw of a predator while in its burrow to lure it into going for the wombat’s neck or main part of its body.

When the predator reaches over the wombat’s near-impervious booty to go for the kill, the wombat will then drive its butt upwards, crushing the predator’s skull against the roof of its burrow. Yes, the wombat can kill things by twerking them to death.

So just to clarify, the wombat can run faster than the Usain Bolt, twerk better than Miley Cyrus, and its sphincter regularly handles almost literally shitting bricks.