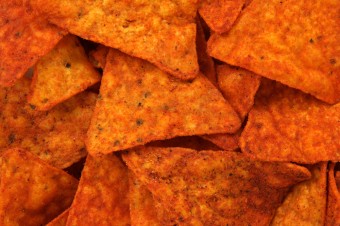 Today I found out that the man who is credited with inventing Doritos (which incidentally means “turned golden / crisp”) had the chips sprinkled over his grave when he died.

Archibald Clark West was born to Scottish immigrants in Indiana in 1914. With his mother too poor to take care of him, he was raised in a Masonic home after his father passed away. In a true “American dream” story, West was able to take a step above his impoverished roots when he was offered a scholarship to Franklin College. He graduated in 1936 with a degree in business and went on to serve in the navy during World War II.

When he returned from war, he put his degree to use by working as a traveling sales representative and then worked on advertising campaigns in New York for Jell-O. By 1960, he found himself working for Fritos in Dallas, Texas. That’s when his fortunes really took off.

The idea for Doritos was conceived in Disneyland, of all places. It wasn’t West who actually first made them, either. The original Doritos were made in Casa de Fritos, a restaurant owned by the Fritos founder, Elmer Doolin. The restaurant was located in Frontierland and served standard Tex-Mex, with every meal boasting a complimentary bag of Fritos. The restaurant was a hit, but it didn’t make its own tortillas, a job which was contracted out to Alex Foods. It was a salesman from Alex Foods who saw discarded tortillas at Casa de Fritos and told the cook he should fry them up and make tortilla chips out of them, rather than just throw them out. Because tortilla chips weren’t yet made by Fritos, and Fritos themselves were given out with the meals, Casa de Fritos hadn’t thought to offer them like other Mexican restaurants did.

The cook did as he advised and used his own special blend of seasoning and the chips were a hit. The restaurant put them on the menu as a regular item but didn’t inform the Frito Company of the change.

About a year later, in 1961, West walked by the restaurant on a family vacation and noticed the chips. He was then the vice president of marketing for the company and felt like he had stumbled upon a goldmine. When he returned to work, he pitched the idea of selling packaged tortilla chips—a happy medium between Lay’s thin potato chips and Fritos’ thick, curly corn chips. His bosses weren’t initially convinced.

Not to be deterred, he managed to finagle some funding from other projects the company was working on, which allowed him to make and test out the product, first making taco flavoured and plain corn flavoured, the latter of which remained tied for his favourite throughout his life owing to being good for dipping. (His other favourite was “Cool Ranch”.) After selling them locally and seeing the chips hugely popular, the other execs were finally convinced and decided to move forward with selling them nationally by 1966.

West retired from his position as vice president of marketing for Frito-Lay in 1971, but remained committed to Doritos and even continued testing out new flavours over the years. He died in 2011, just a year after his wife of 69 years passed way- in his case dying of complications of vascular surgery at the ripe old age of 97, having risen from a child of poor immigrants to the force behind one of the best-loved crunchy snacks in the world. At his funeral, his family tossed Doritos chips into his grave so that his favourite snack could always be with him.

If you’re wondering what flavour was used at his funeral service, his daughter Jana stated, “It [was] just the plain. Otherwise people [would] say, ‘Thanks Jana, I’ve got nacho all over my hand.’ ”