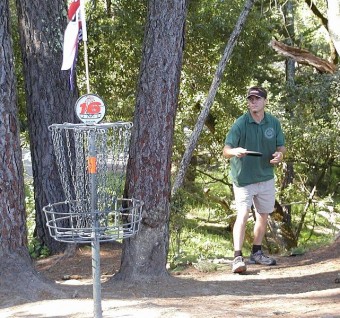 Today I found out the man responsible for the modern Frisbee design and the “Father of Disc Golf” was cremated and had his ashes molded into Frisbees to give to friends and family.

While man has been throwing Frisbee-like objects around for many thousands of years, the Frisbee itself is something of a modern “invention”.  The tale of the Frisbee starts with former building inspector Walter Morrison and his investor Warren Franscioni.  Morrison is considered to be the “inventor” of the Frisbee, though in truth his flying disc was not called a Frisbee and, while extremely close to the design of the “modern” flying disc sold under that name, it’s not technically the current patented design used for the standard Frisbee. In addition, Morrison’s design was notorious for wobbly flight as it flew through the air, something a few later tweaks helped fixed.

None-the-less, Morrison did get the ball rolling with the modern toy and sporting item, getting the idea for selling such flying discs after he and his wife were tossing a tin cake pan back and forth on a  beach in Santa Monica, California.  Some people watching offered to buy their cake pan from them for 25 cents.  Morrison noted, “That got the wheels turning, because you could buy a cake pan for 5 cents, and if people on the beach were willing to pay a quarter for it, well, there was a business.”

He then set about selling these tins at beaches, a small business that was put on hold thanks to WWII.  The war wasn’t all bad for the future development of the Frisbee as Morrison learned quite a bit about aerodynamics as a pilot during WWII, which helped him move beyond pie tins. (Although, he also spent 48 days in a German prison camp after being shot down… so, hmmm.)

After the war, he came up with the “Whirlo-Way” flying disc design that flew more accurately and further than pie tins.  With Warren Franscioni financing him, he started selling this flying disc under a new name, “Flyin-Saucer”, at various fairs.  This went over fairly well, but soon Morrison found himself flying solo when Franscioni left the partnership in 1950.  Morrison soldiered on, further improving the design over the next few years and now selling his flying disc under the name “Pluto Platter”, picking the name with the same motive as “Flyin-Saucer”, hoping to continue to capitalize on the UFO craze in the United States.

In 1957,  Morrison was approached by Rich Knerr and A.K. Melin, owners of  the Wham-O toy company, and convinced to sell the rights to the Pluto-Platter to Wham-O. In order to help boost sales, they renamed the Pluto Platter, “Frisbee”, referencing the more popular name for flying disc toys in New England at the time, “Frisbie”. This was coined after the pie tins commonly used as flying discs on college campuses in New England (from the Frisbie Baking Company out of Connecticut, founded in 1871).  “Frisbie” was trademarked, so they simply changed the spelling to “Frisbee”.

Enter Edward “Steady Ed” Headrick who is largely responsible for the Frisbee becoming something more than just a fad toy item. Headrick got a job at Wham-O when he volunteered to work for them for free for three months with no conditions on what they did after the three months were up. (He first applied in the traditional manner, but couldn’t get a job that way.)  The project they assigned him during this period was the Pluto Platter, which he set about improving in a myriad of ways. After the three months were up, Wham-O not only decided to hire him, but also paid him for the 3 months he’d just worked, even though they were not obligated to do so. Within a decade of being hired, he became the CEO of the company.

Among many other things Frisbee related Headrick was responsible for, he:

Headrick died on August 14, 2002 at the age of 78.  Per his request, his children had his ashes mixed into plastic which was used to make a batch of Frisbees. These were distributed among some of his friends and relatives, as well as auctioned off, with proceeds going towards a Frisbee and Disc Golf Museum. (This has since been opened, The Ed Headrick Memorial Museum, home of the Disc Golf Hall of Fame in Columbia County, Georgia).

I felt the Frisbee had some kind of a spirit involved. It’s not just like playing catch with a ball, it’s the beautiful flight… We used to say that Frisbee is really a religion – Frisbyterians we’d call ourselves.  When we die, we don’t go to purgatory. We just land up on the roof and lay there.

And, indeed, Headrick told his son, Daniel, that he wanted his ashes to “end up in a Frisbee that accidentally lands on someone’s roof.”  In order to honor this request, one of those Frisbees with Headrick’s ashes embedded in it was thrown by his wife, Farina, onto the roof of The Ed Headrick Memorial Museum, where it presumably remains to this day.