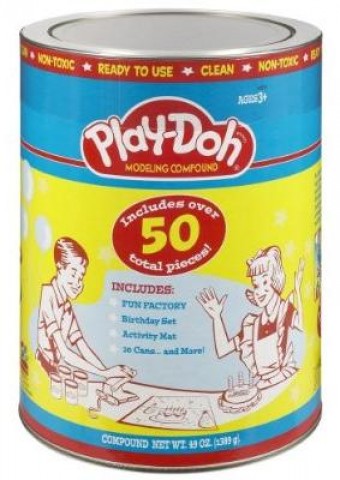 The story of Play-Doh began when Kutol, a Cincinnati based soap company, was about to go under in the late 1920s.  Cleo McVicker, just 21 years old, was tasked with selling off the company’s remaining assets, which at the time comprised mainly of powdered hand soap. Once that was done, the company would be too.  Cleo, however, managed to turn a nice profit in performing his task, the result of which was that the company managed to barely stay afloat.  Cleo then hired his brother, Noah, and they set about trying to make the company viable again.

This brings us to 1933 when Cleo was at a meeting with Kroger grocery store representatives when they asked him if he made wallpaper cleaner.  Wallpaper cleaner was a hot commodity as, at the time, coal was the leading way to heat one’s home, being much more efficient and cheaper than wood.  This had the negative side effect of leaving a layer of soot everywhere that was difficult to clean off of wallpaper as you couldn’t get it wet. (This was before vinyl wallpaper.)

In a bold stroke, Cleo told them he could make the wallpaper cleaner for them (even though no-one at Kutol knew how just then).  Kroger subsequently ordered 15,000 cases of wallpaper cleaner from Kutol with a $5,000 penalty (about $90,000 today) if Kutol didn’t deliver on time. This penalty was more than Kutol had available to pay if they failed. Luckily for the brothers, Noah McVicker was able to figure out how to make wallpaper cleaner using a version of a then common formula for it.

Unfortunately for the brothers, though, while this provided the staple income for their company for about a decade, after WWII, sales began to dwindle with coal heat slowly being replaced by oil and gas furnaces. These furnaces obviously didn’t produce the same type of soot issue that burning coal did, so cleaning wallpaper regularly wasn’t something that was needed anymore.  Sales further dissipated shortly thereafter when vinyl wallpaper became available.  This type of wallpaper could be cleaned with nothing but soap and water, so the McVicker’s product was now virtually obsolete.

To make matters worse, Cleo McVicker died in a plane crash in 1949 and Joe McVicker, Noah McVicker’s nephew who was hired to replace Cleo, found out he had  a rare form of cancer at the age of 25 and wasn’t expected to survive.

However, he did, in fact, survive thanks to a new experimental radiation treatment.  Although, even after treatment, the doctors deemed it unsuccessful and told him he would die shortly (in reality he didn’t die until 1992, though his ending was pretty sad all the same, see the Bonus Facts below for more).

In any event, enter Kay Zufall in 1954, the unsung hero of Play-Doh history and the sister-in-law to Joe McVicker.  Kay was running a nursery school and needed cheap materials to have her kids make Christmas decorations.  In the process of searching for said cheap decoration materials, she read in a magazine that you could use wallpaper cleaner for this task.  Knowing the trouble her brother-in-law’s company was in, she went out and bought a bunch of Kutol’s wallpaper cleaner, to see if it would work for this application.  After not only observing that it worked, but that the kids had a blast playing with it, she called Joe and told him they needed to make their now obsolete wallpaper cleaner into a toy. Joe took a look at the Christmas ornaments made by the kids and agreed it was a great idea.  To facilitate this, they simply removed the detergent from the dough and added an almond scent and some coloring. (It was originally white.)

Joe decided to re-christen the compound which would now be a toy: “Kutol’s Rainbow Modeling Compound”.  Enter Kay Zufall to once again save the day, assuring him that this was a horrible name for their product.  She and her husband, Bob, then set about trying to think up a better one.  In the course of their discussions, Kay came up with “Play-Doh”, which they both loved and suggested the name to Joe, who also liked it.

Thanks to some connections to school board members formed from selling soap, the company initially sold their new product to schools all throughout Cincinnati.  They then began trying to market it to stores, with only a marginal amount of success locally.

While at this point it had saved the company, without money for major advertising, Play-Doh seemed to be destined for very slow growth- at least until Joe McVicker managed to talk his way into an audience with Bob Keeshan, better known as Captain Kangaroo.

Further, even though they still sold the wallpaper compound for 34 cents per can, they were able to get $1.50 per can of Play-Doh despite the fact that the cans contained the same amount of the compound and the two products were virtually identical, save the cleaning compound was white and had a small amount of detergent added.