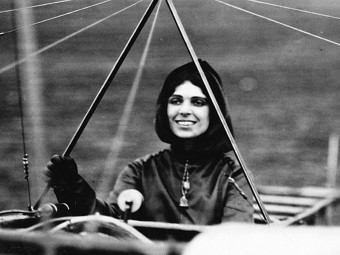 Today I found out about the remarkable Harriet Quimby, the first woman in the United States to get a pilot’s license.

Born in Michigan in 1875, Harriet Quimby’s family moved to California when she was a young woman. Their farm had failed, and they sought a better living situation in the warm, sunny state. Quimby found that the atmosphere was more relaxed in California, particularly where women were concerned. Young women were going to college, becoming doctors, and performing in theatre. Her eyes opened to new possibilities and she started dreaming big.

Quimby didn’t start out as a pilot. Rather, she made a name for herself as a journalist. She first wrote for the San Francisco Dramatic Review before her restless feet took her to New York. There she became famous for her articles published in Leslie’s Illustrated Weekly. The magazine published over 250 articles written by Quimby in nine years. After a stint as a regular contributor, she was hired as a full-time writer for the magazine and took up the position of drama critic in 1905.

Writing gave Quimby the money and means to travel, which she wrote about extensively. She loved seeing different cultures and interacting with new people. She craved the adventure and freedom that travel gave her. Described as “a tomboy full of verve and spunk who was prepared to try anything,” her love of exploration was only outdone by her love of automobiles. In 1906, Quimby wrote an article about taking a 100 mph jaunt in a race car, gushing about the speed and freedom that automobiles provided.

At this point, flying wasn’t on her radar, but she was already an admirable woman pushing past societal norms. She never married, but supported herself as well as her parents on her writing income. She was taking award-winning photographs to go along with her articles.  She also made scripts for silent films, at least seven of which were produced by Biograph Studios in Hollywood, making Quimby one of the very first female screenwriters. With a pen and a camera, she left behind an invaluable record of what life was like at the turn of the century.

In 1910, her love of adventure inevitably brought aviation into Quimby’s life. In October of that year, she met Matilde and John Moisant at an aviation exhibition. John and his brother ran an aviation school, and unlike the Wright Brothers, they were willing to teach a woman how to fly. Quimby was thrilled by the idea of learning to fly a plane and excelled at her lessons, which she managed to get Leslie magazine to pay for in exchange for her chronicling learning to fly for them. In 1911, she became the first female licensed pilot in the United States.

The media latched on to the story of the first female pilot. At first, it was the general public’s opinion that flying should be left to daring young men alone—gentle, fragile young women had no place there. But, as Quimby stated,

The men flyers have given out the impression that aeroplaning is very perilous work, something that an ordinary mortal should not dream of attempting.  But when I saw how easily the man flyers manipulated their machines I said ‘I could fly.’

Quimby did just that, pursuing her passion while at the same time partially playing into societal norms, which helped her popularity. For instance, her first account of her aviation lessons included instructions on how ladies should dress for airplane adventures. As for herself, she wore an iconic purple aviation suit that had reporters calling her the “Dresden China aviatrix.” Her good looks and detailed articles about flying romanticized aviation, making it a more popular pursuit.

Not only did she look good, but the public was soon astounded by her talent in the air. Quimby joined an exhibition group and began competing in a variety of aviation events. Just a month after earning her license, she won a cross-country race. She also became the first female pilot to fly at night, earning $1500 (about $36K today) for a seven-minute night flight at the Richmond County Fair.

On April 16, 1912, Quimby made history again by becoming the first woman to fly across the English Channel. She was able to borrow a 50-horsepower monoplane from Louis Bleriot, the first man to fly across the English Channel, despite raised eyebrows and claims that she would fail in her attempt. Even her friend Gustav Hammel was skeptical of a woman’s ability to accomplish the feat. To help her out, he proposed that he should don a purple suit like Quimby’s and manage the flight for her before secretly switching places with her when he reached France. Quimby refused the offer. Others were skeptical that she was even serious about trying.  As she later stated,

I was annoyed from the start by the attitude of doubt on the part of the spectators that I would never really make the flight. They knew I had never used the machine before, and probably thought I would find some excuse at the last moment to back out of the flight. This attitude made me more determined than ever to succeed.

She did just that, taking off from Dover, England, and landing her plane on the shores of France. The flight took just under an hour. The event received little attention, however, because just about every reporter’s focus was on the Titanic, which sank in the Atlantic just one day before Quimby’s flight. 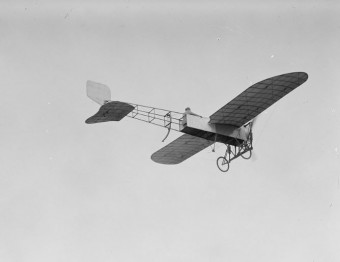 Quimby’s plane shortly before it pitched, plunging her to her death.

Unfortunately, Harriet Quimby’s successes would soon come to an end. On July 1, 1912, she was invited to the Third Annual Boston Aviation Meet and was asked to fly for the sum of $100,000 (about $2.3M today). Her notoriety often drew huge crowds to aviation events she attended and it was estimated that around 5,000 people watched her take off in her own brand new Bleriot monoplane, with event coordinator William Willard tagging along. After a twenty minute flight in which they were estimated to have achieved a then remarkable 3,000 ft. in altitude, they headed back to land. At an estimated 1,000-1,500 ft., the plane suddenly lurched, seemingly standing on end, and then dove. Mr. Willard was thrown from his seat, soon followed by Quimby. Watched by a horrified crowd, they fell to their deaths in the Boston Harbor some 300 ft off shore. Harriet was just 37 years old.

The plane in which they were flying righted itself somewhat and glided to shore, crash landing in some mud.

The exact cause of the accident is unknown. Planes at the time were rickety—just wood and canvas with open cockpits. There were no safety or construction requirements because aviation was still in its infancy and such things were only just being developed. As such, pilots learned from the mistakes of others, and mistakes made 2000 feet in the air were usually fatal. Ironically, Quimby actually had a reputation for using safety precautions like pre-flight safety checks and even on occasion seatbelts, and had written an article on safety measures to be taken when flying a plane.

One hypothesis about the cause for the crash put forth in the papers was that Quimby had been overcome by a sudden gust of wind and, as a fragile woman, had fainted… Needless to say, even in that era, the “fainting” part of that idea was almost immediately thrown out, as anyone who knew Quimby also knew that she wasn’t the type to swoon, being a lover of excitement and adventure.  At this point, she was also an accomplished and talented pilot; so pilot error can also probably safely be ruled out. That leaves us with the “gust of wind” theory, perhaps exacerbated by a mechanical failure of some sort, with the leading “mechanical” theory at the time being that the control cables perhaps became tangled momentarily after, or causing, the sudden pitch.  Whatever the case, the two fell out of the plane before Quimby could right the aircraft.

In the end, the cause of the crash remains a mystery. What isn’t a mystery is the mark that Harriet Quimby left on aviation and women’s rights. While largely forgotten today, her well published accomplishments, sense of adventure, and independent nature inspired many women of her era to follow their own dreams, whether their interests were in aviation or elsewhere.