The Earth is Hottest When It Is Furthest From the Sun On Its Orbit, Not When It Is Closest 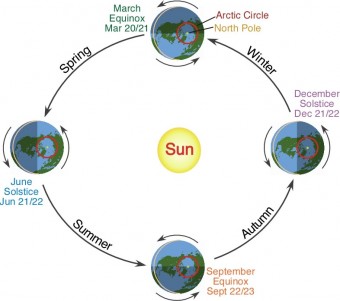 Today I found out the Earth is hottest when it is furthest from the Sun on its orbit, not when it is closest.

During the period when the Earth is furthest from the sun (aphelion), the average temperature of the entire planet is about 4°F (2.3°C) higher than when it is closest to the sun (perihelion). On average, the intensity of sunlight falling on Earth during aphelion is about 7% less than during perihelion. Despite this, the Earth ends up being warmer during the period in which it is furthest away from the sun.

As you might have guessed then or already known, the seasons are not caused by the distance the Earth is from the sun, but rather are caused completely by the fact that the Earth is tilted on its axis 23.5°. This is why when it’s summer in the Northern Hemisphere, it’s winter in the Southern Hemisphere, and vice-verse. Without this tilt, there would be no seasons and the weather from day to day across the globe would be relatively uniform. In this case, there would only be a very slight variation in temperature as the Earth got closer or further away from the Sun, but for the most part, everything weather-wise would stay the same year round.