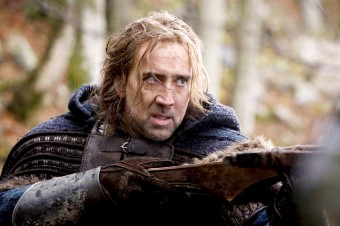 Today I found out Nicolas Cage was originally offered the part of Aragorn in Lord of the Rings.  Cage stated in an interview that he turned down the offer due to the around three year time commitment.  Cage also stated in the same interview that he was offered the role of Neo in The Matrix, but turned that one down as well for the same reason:  “Both are great movies, but they both shot for great quantities of time — I mean years. Australia was ‘The Matrix,’ and New Zealand was ‘The Lord of the Rings.’ I had family obligations, so I’m glad I stayed and had those experiences with my family.”

Interestingly, in the Lord of the Rings, the role of Aragorn was eventually given to Stuart Townsend who has been in various movies including Aeon Flux and The League of Extraordinary Gentlemen.  Townsend subsequently trained for two months for the Lord of the Rings before being fired.  The reason for the firing was officially because Peter Jackson realized Townsend looked too young for the part.

In Townsend’s own words: “I was there rehearsing and training for two months, then was fired the day before filming began. After that I was told they wouldn’t pay me because I was in breach of contract due to not having worked long enough. I had been having a rough time with them, so I was almost relieved to be leaving until they told me I wouldn’t be paid. I have no good feelings for those people in charge, I really don’t. The director wanted me and then apparently thought better of it because he really wanted someone 20 years older than me and completely different.”

Russell Crowe also turned down the role of Aragorn and it was finally given to Viggo Mortensen after one of the producers, Mark Ordesky, saw a play with Mortensen in it.  Mortensen was also initially hesitant to take the role because of the time commitment involved, but his son, who is a huge fan of the books, convinced him to take the part.