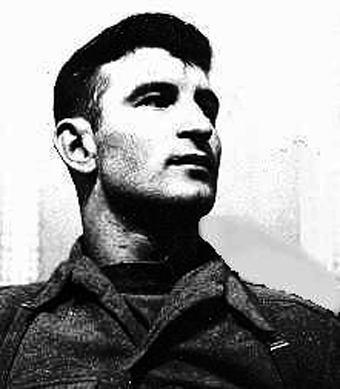 Leo Major was a French Canadian man born in 1921. He probably didn’t think he was going to be more of a hero than the average soldier when he joined up with the Canadian Army at the start of World War II—supposedly he simply joined up because he wanted to show his father, with whom he had a shaky relationship, that he could do something to be proud of.

Major started his overseas tour in 1941, serving in Le Regiment de la Chaudiere. On D-Day, he was wounded by a grenade, resulting in the partial loss of vision in his left eye. Major refused to be sent home, arguing that he only needed one good eye to sight a rifle. He was placed in the scout platoon and became handy with his rifle, earning himself a reputation as an excellent sniper.

In April 1945, Major’s regiment was approaching the city of Zwolle.  His commanding officers asked for two volunteers to do a reconnaissance run and report on the  number of German troops patrolling the city. If possible, the volunteers were also asked to get in contact with the Dutch resistance as the Chaudiere regiment was to start firing on the city the next day. At the time, Zwolle had a population of around 50,000 people and it was likely that innocent civilians would number among the casualties.

Along with his friend Willy Arseneault, Major started to creep toward the city. Willy was killed by German soldiers around midnight after the pair ran across a roadblock. Reportedly, Willy was able to kill his attacker before dying himself. Understandably angry, Major picked up his friend’s machine gun and ran at the enemy, killing two of the remaining German soldiers; the rest fled in a vehicle.

Major continued on and soon ambushed a staff vehicle and captured the German driver who he had lead him to an officer drinking in a nearby tavern. He informed the officer that Canadian forces would begin firing heavy artillery on the city, resulting in the deaths of many German soldiers and Zwolle civilians alike. He didn’t mention that he was alone.

Afterwards, Major gave the man his gun back and, with that seed of knowledge soon to be spread throughout the German troops, he immediately began running up and down the streets shooting a machine gun and tossing grenades. The grenades made a lot of noise, but he made sure to place them where they wouldn’t cause much damage to the town or its citizens.

In the early hours of the morning, he stumbled upon a group of eight soldiers. Though they pulled a gun on him, he killed four and caused the rest to flee. Major himself escaped the confrontation without injury and only one regret: he later stated he felt he should have killed all of them.

As he continued his campaign of terror throughout the night, the German soldiers began to panic, thinking a large body of Canadian forces were attacking them.  By 4 a.m., the Germans had vanished. An entire garrison—estimated to have been made up of several hundred soldiers—had been made so afraid of nothing more than a single, one-eyed man that they fled the town. The city of Zwolle had been liberated without the need for the death of civilians or many of the soldiers on both sides of the lines that would have taken part in the messy battle.

Rather than fall asleep after running around the city in the wee hours of morning avoiding German gunfire and causing all kinds of mayhem, Major enlisted the help of several Dutch civilians to retrieve the body of his friend Willy. Only after his friend’s body had been recovered did Major report to his commanding officer that there was “no enemy” in the city. The Canadian army marched in to the sound of cheers rather than gun shots. For his actions at Zwolle, Major received a Distinguished Conduct Medal.

If this wasn’t all enough, perhaps I should mention that in 1944, a year before he liberated Zwolle, at the Battle of Scheldt, Major captured 93 German soldiers by himself and led them to waiting Canadian troops.

He and Willy were teamed up again on a reconnaissance mission to find out what had happened to a company of men that had seemingly disappeared.  Willy was sick, so Major went alone.  He soon found that the company he was looking for had all managed to get themselves captured.  Rather than go back and report immediately, Major was cold, so went into a nearby house to warm up.  At this point, he saw a couple German soldiers through a window and decided to capture them, which he did.  With them presumably helping him lug his balls of solid steal along the way, he had them take him to their commanding officer, who was among about 100 other German soldiers at the time.

His offer was basically- surrender or you die.  Of course, he’d then die too, but this plan miraculously worked.  Why?  Because some nearby SS troops observed the exchange and misinterpreted, thinking the commanding officer and his men were surrendering.  Thus, the SS opened fire on both Major and the German soldiers around him.  The Germans being fired upon decided surrendering to Major was better than being killed by the SS, so they went with him, with the SS hot in pursuit, killing some of them along the way. All total, 93 Germans soldiers made it back with him and became POWs.

For this amazing feat, Major was offered a Distinguished Conduct Medal, but refused it because he felt his commanding officer, Field Marshall Montgomery, was “incompetent” and that, “He had made an awful mistake.  I didn’t like him at all.” Thus, he didn’t want to receive an award from the Field Marshall’s hand.

Still not impressed?  How about how he won his second Distinguished Conduct Medal, besides the one earned liberating Zwolle, which would have been his second, had he accepted the 1944 one. The second one he chose to accept didn’t come in WWII.  Rather, it was achieved during the Korean War where he managed, in a lot of ways, to top the other two, though this time with the help of just under a couple dozen other people.  But I think you’ll soon agree, it was still ridiculously amazing.

Around 40,000 Chinese soldiers had successfully dislodged a large body of U.S. soldiers from a key hill (Hill 335 to be exact).  Unable to retake the hill, Major and a small group of other snipers were sent in.  There job was to sneak up onto the hill, in the midst of all those Chinese soldiers, and then open fire.  After doing this and throwing the Chinese soldiers into a panic, rather than retreat, Major had his men continue firing and managed to do what thousands of U.S. troops had been unable to do, re-take the hill.

Of course, the Chinese soon regrouped and two divisions, totaling over 14,000 soldiers, were sent to retake the hill from Major and his tiny band of snipers (20 men total).  Again, rather than retreat as ordered, Major and his band decided to hold the hill.  After three days of repeated attacks from over ten thousand soldiers using every manner of weaponry, reinforcements arrived and relieved Major and his men, who had successfully held the hill during that span.

I presume after being relieved and having the relieving commanding officer perhaps tell him it was madness to try and hold the hill with so few men, Major most likely responded with “Madness?  THIS IS SPARTA!!!!” 😉